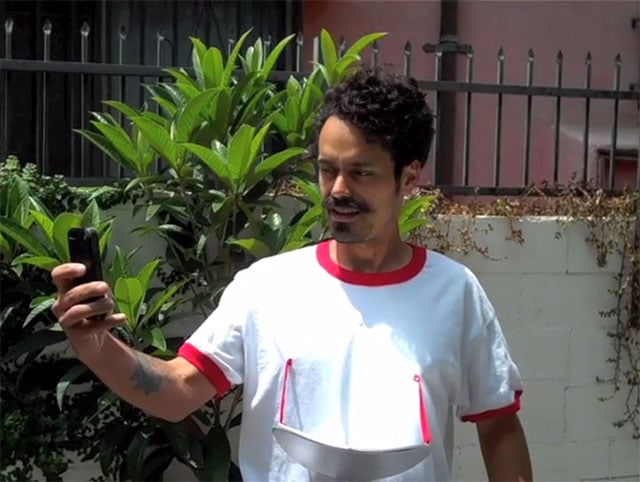 If you thought the Selfie Arm was a strange idea, check this out: the SelfiePICTEE is a T-shirt that has a fold-down bounce reflector on the front that provides a quick fix for the harsh shadows on your face when snapping a selfie.


The whole thing appears to be a joke or an art project like the Selfie Arm, but the Kickstarter campaign for funding this idea is quite real — 5 people have already pledged $395 toward the $500,000 goal at the time of this post. Here’s a short video introducing the idea:

“I have taken a lot of selfies, and I have worked on a lot of photo shoots and a lot of video shoots,” says inventor Chuck McCarthy. “The one simple thing that can make the difference between a shot looking like crap and a shot looking like amazing gold magic is a metallic bounce. But most of the time, you need someone else to hold the bounce.”

“But… what if the bounce was attached to your shirt!? This was the idea that started the SelfiePICTEE.”

A pledge of $20 on Kickstarter will be rewarded with a SelfiePICTEE if/when it does launch — but McCarthy has a long ways to go before this project reaches its half-million-dollar goal. For a cheaper DIY solution, you can attach your extra metal pizza pan to your clothing.

(via Kickstarter via Amateur Photographer)