An Ontario-based vegan who goes by the name Vegetable Police recently released the video above and then began warning photographers with it in online photo forums. He claims that modern digital cameras “output high levels of radiation” and that people should be careful not to have the camera in their hands or against their faces for long periods of time.

“I tested the Sony RX100 mark 3, and the Sony wx350,” he writes, claiming that both cameras are dangerous in the amount of radiation they emit. “The Panasonic FZ1000 however measured much lower than these other 2 cameras, so there is hope that perhaps not all cameras output dangerously high levels of EMF’s.”

“At least eat some oranges after you take a picture,” he says near the end of the 5-minute video.

He shared his video in the DPReview forums a month ago, and was quickly ridiculed by numerous photographers who refuted his claims.

“If you want to see how close minded photographers can be towards this subject, check this post I made at dpreview,” he writes in the video’s description. “The hatred I received there was pretty disheartening if not fascinating. The post reached it’s post limit, so I can’t respond anymore.” 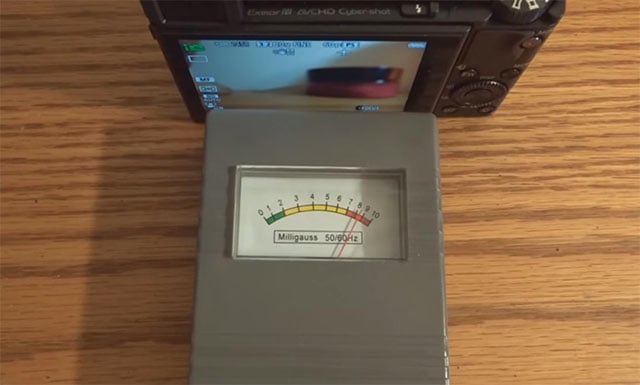 The general consensus among photographers and those familiar with this subject matter appears to be that: 1) this guy doesn’t know what he’s talking about, and 2) cameras are perfectly safe and that any readings from them in terms of radiation and magnetism are negligible compared to other thing we encounter on a daily basis.

Oh, and the device used in the video is a $35 gadget called the Gauss Meter that “can be used for ghost hunting and paranormal work,” according to its description on Amazon.

P.S. Newer cameras may be harmless and you should be able to disregard the above video completely, but cameras and lenses from decades ago are known to sometimes be radioactive. If you’re planning on using vintage camera gear, that is something you can look into and be aware of.

(via Vegetable Police via sonyalpharumors)