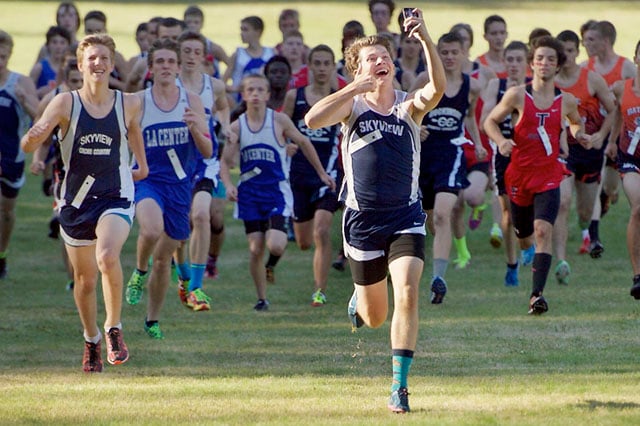 Photojournalist Troy Wayrynen has been selected as the 1st Prize winner of the Sports Feature category in this year’s Best of Photojournalism contest by the NPPA, one of the most prestigious awards for photojournalists.

His winning photo, a crop of which is shown above, shows a high school runner using his phone to take an unusual selfie at the beginning of a cross country race.

The runner was 17-year-old Jacob Gillingham, a junior at Skyview High School in Vancouver, Washington, who sprinted ahead of the pack to snap the photo — “not such a good idea, Gillingham says.” Wayrynen was in just the right place at the right time, and captured a photo of Gillingham the same moment the runner snapped a photo of himself. Gillingham later shared his image through his Instagram account.

Runner’s World reports that the winning photograph was actually one of Wayrynen’s outtakes from that day. It was never officially published, but the photojournalist decided to submit it to the NPPA’s contest.

Wayrynen tells Runner’s World that he believes the photograph to be “a sign of our times” that’s “interesting and humorous at some level.”

“I’m excited and grateful to be awarded first place in the sports feature category. It simply feels good to be recognized alongside so many other outstanding photojournalist,” writes Wayrynen on his Tumblr page. “A special thanks to the judges for their time, incredible commitment and dedication for making the NPPA Best of Photojournalism contest one of the best.”

Colorado Bill Would Punish Officers Who Interfere with Photographers