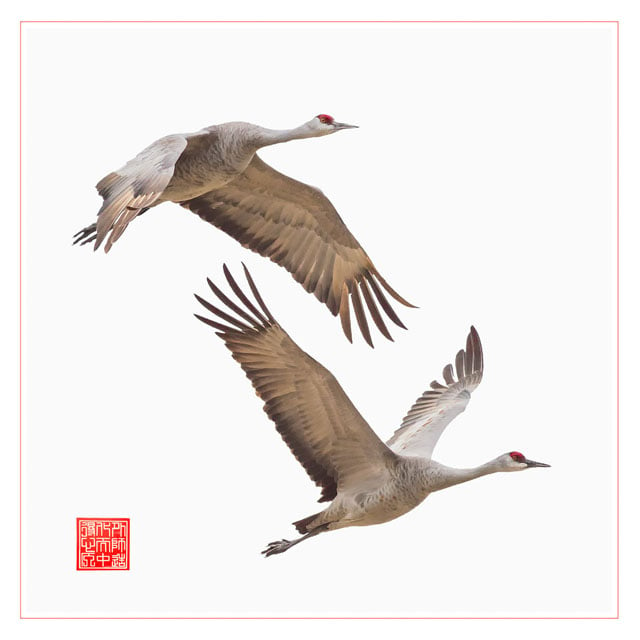 On March 23, I was in Kearney, Nebraska to view and photograph the annual migration of the Sandhill cranes. These birds are graceful, awkward, beautiful and kooky all at the same time. They fly with grace, but while on the ground sometimes exhibit some of the funniest behaviors you’ll see from a bird. With a wingspan of up to 7 feet, these birds aren’t the biggest, but they’re some of the biggest most of us will get to see.

Every spring, hundred of thousands of them, 80 percent of the world’s population in fact, gather in a 10 mile stretch along the North Platte River in Nebraska. It is a sight, and a sound, to behold. So on our way back from Wyoming to Massachusetts it’s always a good stop. It’s not always a great photo opportunity, though. The weather can be bad, the light can be bad, and so on.

This year there weren’t as many cranes and they were hard to find at first. I think we may have come a bit late in their migration cycle. But once I found them, there they were. The photographic problem was that it was heavy overcast, the light was flat and the cranes were acting skittish. Usually I can approach them on the ground within about 50 yards and photograph them doing their thing with a telephoto lens, but this year I couldn’t seem to get anywhere near them before they would hop or fly away. Hmmm…

I started trying to get some flying shots. Typically the flying shots aren’t my favorite as there are lots of them out there and I try for something at least slightly unique. But there I was with my tripod and long lens so I thought I’d point upward and see what happened. What was I going to do with that? Well, I’ll take you through my thought process, and then post-production process in the hopes that you may find it interesting to see how one photographer gets from here, to something that I think isn’t too bad at all.

I didn’t like this image at overall but there were a couple things that I did like. The two birds at the top were in just about opposite points in the wing movement. I thought that was interesting. But there were many things wrong. Like the birds were way too dark. The sky was drab. They were flying the wrong way! (I like animals to move left to right, I have no idea why!) And finally, the bird at the bottom was doing the same thing as the bird above it and that was boring.

So I checked the image to make sure it was sharp (that’s the first thing I do) and decided to focus on the two birds on top. I cropped it and flipped the image so they were flying the right way and got this.

Now, most photographers and artists will tell you that you should never have two of something. One is OK, three is much better, but two? And they’re right. But rules are meant to be broken and I though that because the two were so complimentary in their wing position that it just might work. But it sure wasn’t working yet. I had obviously messed up the exposure allowing the sky to overpower my camera’s meter and not compensating for that. So the next thing I’d have to do was to adjust the exposure of the raw image from my camera. After a little tweaking the image started to look a little better.

At least now you can see them! But still boring. Because the light was so flat, the contrast is low, the details were hard to see and one of the coolest features of the Sandhill cranes, their red bonnet, was not really evident. But we have a few trick to fix those pesky problems, and once done, the picture was improving.

OK! Now we have some nice looking birds. But it’s not much of a picture, is it? No. But why? Maybe if the birds were closer together it would be better because they seem to be doing their own thing and now that I can see them, they appear more separated. Maybe we should use just one of them. No, wait, let’s keep them both but ask them to move a little closer to each other. 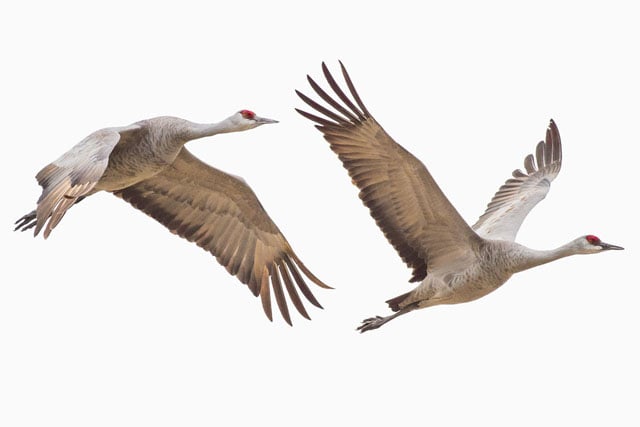 Fortunately these are very obliging birds and once they were closer, and they appeared to be flying together, the image was starting to look like, well, something. But it just wasn’t quite right.

So I put it down for a day. Sometimes it’s better for me to get away from a project and let the brain work on it without my interference. I came back the next day and looked at it again. Now I had an idea. What if the bird on the left were above the other bird rather than behind it? That might make for a much more pleasing composition.

Now before you think to yourself “Hey, wait a second. You can’t just be moving these birds around willy-nilly. That’s not how they were in nature.” You’re right, that’s not how they were flying. And if I were editing images for a nature or bird magazine I wouldn’t accept this image. If I were photographing trying to depict Sandhill cranes in their habitat I wouldn’t be making these changes either. I am making photographs as art, and just as a painter might position the birds in a pleasing composition, so does the photographer when creating art photography. So let’s move the birds a bit. When we do we end up here. By moving the birds and squaring the crop, I now felt that I had a much more pleasing composition and I was starting to like it! But we were not quite done. As I looked at the overall image, it started to take on an asian art look to me. So I thought I should accentuate that and give it an asian treatment. And when I did, we have the finished product. By adding a thick white border, a thin red border and placing some Chinese calligraphy I now have a piece that I am happy with. I’ll print his on a parchment style paper and I think it will look pretty good.

If you scroll back to the top and remind yourself of what we started with, you can see that we’ve come a long way, but we have maintained the integrity of the subject, which is very important. I’d love to hear what you think of this and what images you may have overlook that you might go back to. Thanks for reading and your comments are welcome and appreciated!

About the author: Michael S. Cohen is a photographer who loves to travel and make pictures. He spends his time traveling between Boston, Jackson Hole, Wyoming, an the New England coastline. You can visit his website here and his blog here. This article originally appeared here.