The two “Final Four” basketball games of the 2015 men’s NCAA basketball tournament were held yesterday. One of the photographers sitting on the sideline was 82-year-old Rich Clarkson, a man who has been photographing the tournament for 60 straight years. The video above is a 5-minute segment CBS recently aired that looks into Clarkson’s life and work as he “hangs up his camera” after this year’s tournament. 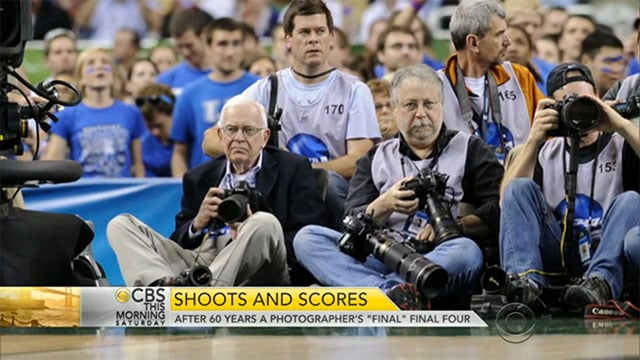 Some interesting facts about Clarkson’s career: he first covered the NCAA championship when he was just 20 years old in 1952. He has photographed a Rose Bowl, a World Series, four Super Bowls, and six Olympics. He photographed the first all-black starting lineup in an NCAA final. The first photo he sold to Sports Illustrated was a shot of NBA legend Wilt Chamberlain while he was in college. His first shots sold for 75 cents each, and his latest photos these days sell for $5,000 a pop.