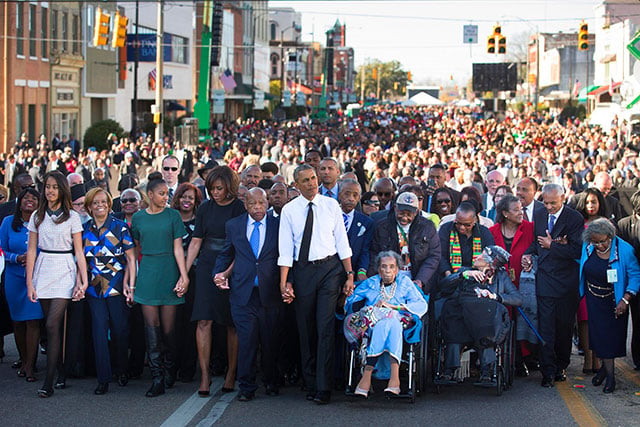 This photo of President Obama leading a commemorative march in Selma, Alabama, was featured on the front page of the New York Times this past weekend. The event was attended by notable politicians from both sides of the aisle, including former president George W. Bush, who was also on the front line of the march. Times readers who noticed that Bush was notably absent from the photo began to criticize the paper, and soon news organizations began to report on this omission as well.

The Times is now saying that they did not crop Bush out of the photograph — he was simply left out by the photographer because he was standing in the sun and overexposed.

In an article published yesterday, the newspaper’s public editor, Margaret Sullivan, did her best to set the story straight. Her email inbox was inundated with emails from angry readers, she said, with many of them saying they were canceling their subscriptions.

Why would you crop former President Bush and First Lady Laura Bush from your front page? It seems irresponsible and unnecessary. The Selma 50th Anniversary was a momentous occasion that brought many people together regardless of political party affiliation. Shame on you and the NY Times for furthering a liberal agenda versus providing balanced news coverage. I’m extremely disappointed in the NY Times and expect that you will do better next time.

Sullivan questioned Times head photo editor, Michele McNally, who said that there was no crop made, and the published photo was exactly what was received.

The next person Sullivan went to was Doug Mills, the photojournalist who had captured the image. Mills explained that non of his submitted photos included the Bushes due to technical reasons rather than political ones:

Just so you know … at the time the photo was taken, I was using a 70-200 long zoom lens. I also had a remote camera with a wide-angle lens attached to the side of the truck that took a photo at the just about the exact moment as the tighter one. As you can see, Bush was in the bright sunlight. I did not even send this frame because it’s very wide and super busy and Bush is super-overexposed because he was in the sun and Obama and the others are in the shade.

“The explanation and reasoning by Mr. Mills and Ms. McNally make sense to me,” Sullivan writes. She’s satisfied that this omission was done purely for photographic reasons — to choose a photo that’s “compositionally strong” with “impact” — than for any other kind of bias.

“While it would have been moving and worthwhile to see both presidents in a front-page photograph, I see no evidence of politics in the handling or presentation of the photo,” she says.