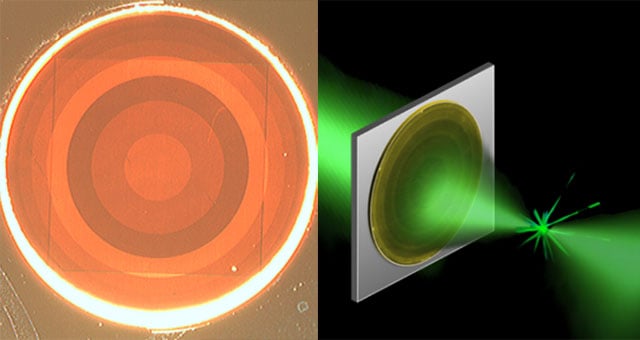 A team of researchers at Harvard are trying to revolutionize the world of optical lenses. Instead of traditional curved lenses that suffer from various optical flaws, they are working on a completely flat and ultra-thin lens that overcomes age-old problems and pushes optical quality to the limits of the laws of nature.


We first reported on the lens back in 2012, when the research group, led by professor Federico Capasso, unveiled a prototype to the world. That 60 nanometer lens — about the thickness your fingernails grow in 1 minute — was able to focus light “completely accurately,” but it could only work with a single wavelength of light instead of the entire visible spectrum.

Still, at the time, Harvard boasted that the lens’ focusing power “approaches the ultimate physical limit set by the laws of optics”:

The scientists’ latest unveiling is an impressive improvement on the previous design. Called an “achromatic metasurface,” the latest flat lens uses nanoantennas on the surface made of dielectric material (instead of metal) that improves efficiency and allows it to be used over a wide range of light wavelengths.

In traditional refractive lenses like those in your camera lens, incoming light suffers from chromatic aberrations because the different wavelengths of light are focused to different points. Lens companies will therefore include additional elements in order to fix these problems and focus all the wavelengths to the same point. 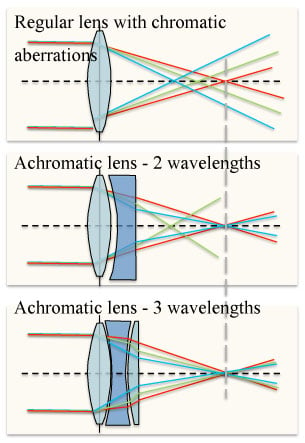 How well these additional elements correct for chromatic aberrations is a huge measure of how good a particular camera lens is.

This new flat lens, on the other hand, is able to focus 3 incoming wavelengths onto the same spot without the need for additional corrective elements, and it uses tiny antennae on the surface to do so: The innovation could have a future impact on the world of photography. It’s a “design that rivals the bulky equipment currently used in photography, astronomy, and microscopy,” reports Harvard. “It could also enable the creation of new miniature optical communications devices and find application in compact cameras and imaging devices.”

Harvard also says it is patenting the new technology and is “actively pursuing commercial opportunities.” They’re hoping to attract the interest of the optics industry and see flat lenses being widely used in the world of the future.