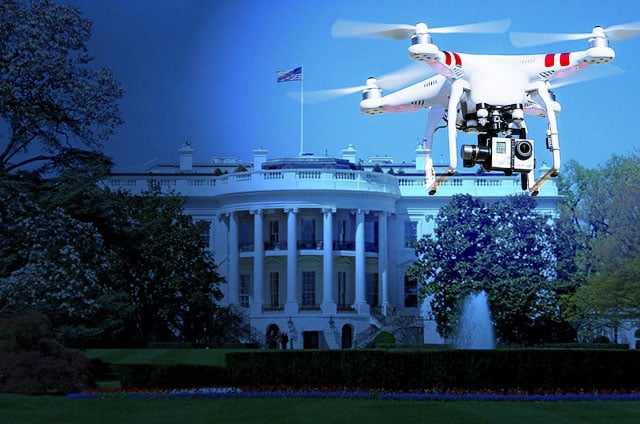 Yesterday we reported that a DJI Phantom quadcopter operator had accidentally crashed his camera drone onto the lawn of the White House at 3 in the morning, causing a security panic among those tasked with ensuring the President’s safety (later reports suggest the man was drunk).

DJI wants to make sure this type of incident never happens again: the company is issuing a mandatory firmware update that will disable its camera drones in Washington DC’s no fly zone.

The new firmware will prevent Phantom 2 drones from flying anywhere inside a 15.5-mile radius of downtown Washington DC, so owners living in the area will now need to travel outside that perimeter if they want their drone to be operational. DJI’s Inspire 1 and Spreadwings series have not yet been restricted in the same way.

This update is actually part of an already planned expansion of DJI’s No Fly Zone system that restricts flying around airports, across national borders, and other restricted areas (as determined by local authorities).

Engadget reports that similar restrictions are already built into DJI’s drone sold in China, preventing the quadcopters from flying in sensitive areas of Beijing.

Flying drones has already long been illegal in Washington DC’s highly secure airspace, but this new move by DJI will help to enforce things from the drone operator’s side of things. If this type of firmware restriction becomes ubiquitous in the camera drone industry, it will be more difficult for people to find themselves on the wrong side of aviation law.

Pen, Brush and Camera: A 1998 Documentary on the Life and Work of Henri Cartier-Bresson