Update: There are new developments in this story. Please see below.

There’s a dispute going on over in Texas that shows the importance of getting your contracts right as a photographer. A pair of Dallas newlyweds are going public with their disagreement with wedding photographer Andrea Polito over an album “cover” charge that Polito is asking for — a charge that doesn’t specifically show up in the contract.

Local news station NBC 5 reports that the couple had paid Polito $6,000 to shoot their October 2014 wedding, and expected to receive a “40 page 8.5×12 Storybook Album with up to 80 images,” as stated in the contract. 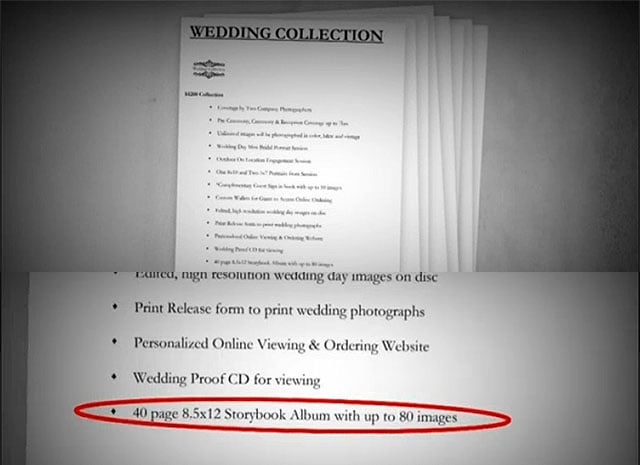 After the wedding, however, Politio allegedly informed the couple that they would need to pay at least an additional $150 to order a cover for the album. The couple says they balked at the fee and argued that they had already paid Polito in full. “Do we pay extra for a cover? Is there not a standard cover it comes with?” they wrote to her in an email.

“Your package includes the 40 pages & 80 images portion of the album, but we leave the album cover to be decided on when you actually order (it),” Polito responded.

The couple had expected that the album would come with a free cover. “An album comes with a cover. It’s a component of an album. It’s a book,” they tell NBC 5. Politio says she had told the couple about the extra charge in one of their early meetings, but the contract doesn’t mention it, and that’s what the couple is now having a problem with.

NBC 5 reports that Polito is reportedly now refusing to provide a CD with digital copies of the photos — as promised by the contract — until they fork over dough for the cover. She’s also reportedly saying that there will be an additional $250 archive fee if the couple does not take action by the middle of next month.

This all goes to show that as a photographer, you should never rely on verbal agreements when it comes to conditions and charges. Always get everything in writing.

Update: Here is a copy of Politio’s response. Apparently NBC 5 chose not to mention the whole thing:

Hey @ScottGordonNBC5 – how come the only part of Andrea's response you included was the last sentence? pic.twitter.com/sjyjkUNxka

Here’s another screenshot that appears to be an exchange before the news story happened:

PROOF Neely is a liar. Sent BEFORE @Neelykins TV interview – Andrea offers the cover to her free of charge. pic.twitter.com/ZWwnAzIgow

Update on 01/20/2015: Photographer Andrea Polito has written an open letter explaining her side of the story. Here’s an excerpt:

I have received consistent recommendations to “say something” without being emotional. But this is absolutely emotional. For 10 years I have worked extremely hard to build my reputation, and believe that, not only do my 5 star ratings not lie, I have absolutely earned them. Prior to last week, on several occasions this bride had expressed her happiness and resounding approval for the photographs and her experience with us. Indeed, there are several emails that show her enthusiasm for our services and gratitude for the quality of her pictures, yet none of these emails were documented in the recent news story. This bride had posted our pictures across her social media accounts and had nothing but great things to say.

The story you are not hearing is that it was only last week when the bride claimed to realize that, per our contract, welcome packet, and emails, she would not get her wedding images until her album was completed. This conflicts with the numerous emails in which we clearly reiterated what is stated in the contract: low-resolution watermarked proofs are sent to the couple several weeks after the wedding for them to choose their desired photos, while the non-watermarked, high-resolution images are released upon completion of the album. As any of our brides would tell you, we have a very strong policy regarding the high-resolution files, which are not released until the photo album is completed. As a photographer, I do not stand alone with this policy. Although every photographer has their own specific policy and procedure for their business, we do this to complete our contract in full with the bride, delivering the album with their files and having them sign a release form. Once the album and high resolution files have been delivered, we are no longer liable for these images, which is our way of closing the books on past weddings. To suggest that we would hold images “hostage” in retaliation is simply inaccurate. Our intention has never been to “hold hostage” a couple’s images. We have always been upfront and honest.

In fact, over two weeks ago we emailed the bride and stated our willingness to release to them their images prior to having a completed album. Then last week, we also offered to assume the cost of the album cover before the mention of a news interview ever occurred. Although the contract provides when the images were to be delivered, we attempted to make concessions to keep the bride satisfied.

Contrary to the bride’s allegations, our business has been in constant contact with her over the last four months. Her allegations to the contrary are blatantly untrue.

As a matter of fact, I personally emailed her on Wednesday, January 14th to tell her that I had not been in the studio that week but had heard from my studio manager that this bride was unhappy. Although I did not do anything illegal, immoral, or unethical, I apologized to her and was willing to make concessions as a matter of good customer service and to make her happy. I hoped we could move forward. However, this was never mentioned in the news story.

I also referenced a prior conversation that I had with the bride months prior where I expressed an interest in paying her for her services to help with my blog. This bride is a blogger and social media expert with the means necessary to help build a business over social media. She also has the means necessary to tear down a business. That is not an accusation, but an observation.

Several hours after I contacted the bride to make things right by her, I received a text-message where the bride had posted on Instagram a photograph of NBC at her apartment with the caption “No big deal, NBC in our apartment” and a comment explaining, “it’s an investigative story on why we can’t get our wedding photos that we’ve paid for.” Shortly thereafter, I received an email from a reporter at the same local news station. We had taken action to make things right, and instead this bride went directly to the media , bragging about the upcoming news story on all of her social media accounts and creating a very large following, which was boosted by her business as a professional social media expert. Despite representations to the contrary, I was not provided three days to respond to the media story. It is sad and hurtful that she has taken such joy in attempting to destroy a reputation I have spent years trying to build.

If this story were truly based how upset and hurt she was, she would not post statements to humiliate me or harm my business. Statements like, “I’m pretty sure her business is ruined,” “I hope this goes viral,” “feeling excited,” and “justice has been served” are not the actions of a concerned and hurt bride; they are actions of an individual trying to take someone down and instigate a lynch mob of negativity across the nation. To make matters worse, I responded with a lengthy statement to the reporter on Thursday morning because I was out of town for work, and was told in writing from the reporter that “I will do my best to sum up your position to give your side of the story.” In the interview that aired, this reporter only included the very last sentence of my statement completely leaving out key information in the story.

You can read the entire statement here.

Hippo Lunges Out of the Water At a Photo Safari Boat