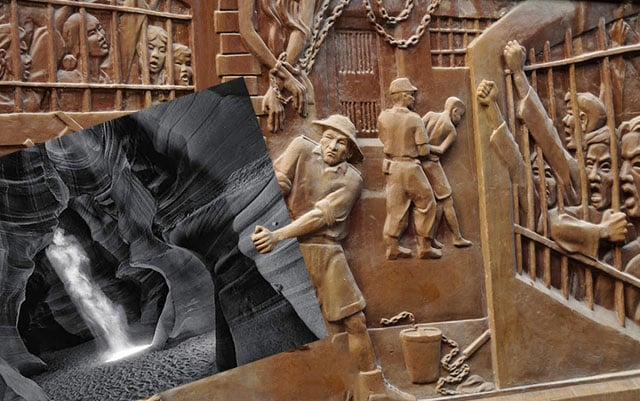 (Newswire, December 13th, Las Vegas) — A group of leading photographers, curators, and general taste arbiters has determined that Peter Lik’s sale of a photograph may constitute torture under the Geneva conventions.

The photograph in question, an open edition of a mundane Southwestern landscape, sold recently for $6.5 million, the largest figure for a photograph in history.

The sale, announced in an artistically unsanctioned press release which circumvented auction houses and was generally agreed upon as “fishy”, was conducted in conjunction with two others totaling $10 million. Rubbing salt in the wound, the buyer remained anonymous. For members of the art establishment, the dynamics of the sale amounted to waterboarding or other practices causing extreme mental anguish.

The alleged torture had several components. One major factor was the artist’s lack of museum connections. Lik is based in Las Vegas, a sensual city rumored to be somewhere between New York and Los Angeles. It is a popular tourist destination among the working classes but holds scant artistic provenance, and Lik has no official ties to the sanctioned photography community. “I’ve never even heard of him,” said officially approved photographer Martin Parr. “It’s pretty astonishing. He has no standing whatever in the fine-art world that I belong to.”

That an upstart would dare break the sales record, previously held by officially approved artist Andreas Gursky, was perceived as an affront to common decency. But the nature of the torture was exacerbated by the notably inferior quality of the print in question. In contrast to Gursky’s dynamic and exciting Rhein II, Lik’s landscape is viewed as stark and simplistic. The photograph shows a ghostly patch of light in a canyon and carries the unironic caption Phantom. “It’s an abomination,” according to Michael Hopper, an officially approved gallerist based in the United Kingdom.

The sale of the photo is believed to be torturous for other reasons. First, the subject matter depicts a notable photo op. Antelope Canyon has been photographed thousands of times, long since draining all sense of originality or creative thought. In this context Lik’s procedure was deemed medically and aesthetically unnecessary. More painfully, the image in question is believed to be overly sentimental and picturesque, two qualities thought to be safely weeded out of officially certified fine art after years of struggle.

More importantly, the earthly and common quality of the subject matter conveys a spirit of accessibility which, if spread, is believed to threaten the pantheon. “If you go to a Sherman show or look at a Steichen print,” says Hopper, “this is quality and creativity that is unobtainable to the man on the street.” By encouraging the lower classes to believe they might be artistic, Lik’s sale is thought to be a dangerous provocation.

The grisly techniques listed above are claimed to constitute torture in and of themselves. But, according to photographic leaders, the most dire threat goes to the financial heart of the matter. Fine art photography has been officially classified as a passive investment vehicle in which wealthy patrons may park their money temporarily. A piece of fine art confers an aura of respectability on the purchaser while appreciating in value, characteristics unavailable to, say, real estate or pharmaceutical concerns. A healthy network of auction houses has been established to determine artistic value in exchange for a cut of the action.

But Lik’s photograph has no resale value. By challenging investment logic, Lik threatens to topple it. It’s thought that if people buy art just because they like it, and with no thought of investment potential, the floodgates will open to the masses. Failure to provide oversight may lead to critical lapses, and unsanctioned opinions may gain influence. The torturous impact of this thought is so extreme that photographic leaders cannot tolerate it for more than a few minutes at a time.

Lik claims that his sales practices are humane and legal, but his controversial tactics have been universally panned by sanctioned art critics. They are thought to be not only wrong but counterproductive, providing little new information to art history. When an officially approved photographer is subjected to a sale such as Lik’s, they’re willing to say anything in order to alleviate the pain.

Editor’s note: As with Jeff Frost’s “press release” published earlier today, this article is a tongue-in-cheek take on current events.

Image credit: Header graphic based on photograph by Dennis Jarvis