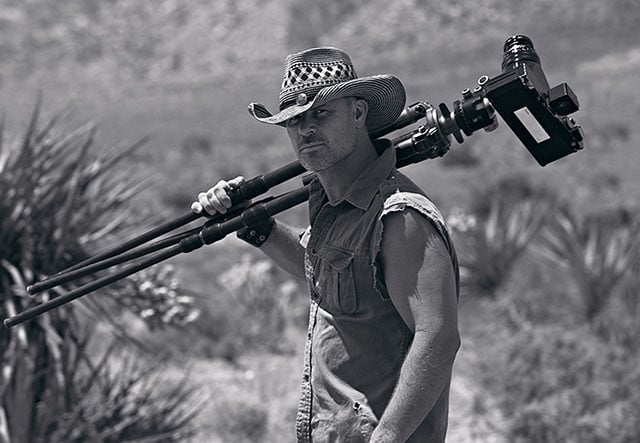 Last December, the art world balked when photographer Peter Lik announced the world’s priciest sale of a photograph: a single black-and-white print titled “Phantom” for $6.5 million. Here’s another fact that will drop your jaws: Lik has sold nearly half a billion dollars worth of photographic prints, which means he’s possibly the best-selling fine-art photographer in history.

That’s what the New York Times reported yesterday in a lengthy feature on Lik in its business section. It writes that the photographer has sold over 100,000 photos for $440 million; last year, it was at an average rate of $1.6 million per week.

It’s a fascinating glimpse into how Lik’s world works and how it runs against the conventions of the traditional world of fine art.

Lik calls himself “the world’s most famous photographer, most sought-after photographer, [and] most awarded photographer.” The man owns a 100,000-square-foot factory in Vegas dedicated to churning out his prints.

If you’ve been scratching your head about that “Phantom” sale, the Times piece sheds some light on how it came about:

With his eye fixed on a record-setting sale, [Lik] printed a single copy of “Phantom.” Then he alerted a handful of his most ardent collectors, one of whom, he said, agreed to the $6.5 million price. Before the deal was signed, Mr. Lik hired a public relations firm to make sure that the sale, and the record, were noticed […]

It’s hard to know what’s “official” about it. Previous records in photography were set by competing bidders in public auctions for images that were familiar and celebrated. This was a private sale for a newly printed photograph, and scant details were offered. But while the buyer’s hidden identity inevitably arched some eyebrows, anonymity in such deals is not unusual. Joshua Roth, the Los Angeles lawyer who represented the buyer, declined to name his client, though he emphasized that the client exists.

So basically, Lik wanted the record for most expensive photo, so he flipped through his Rolodex and made it happen.

If you pay a visit to the list of most expensive photos over on Wikipedia, you’ll find that Lik’s name now shows up 3 times in the top 20. However, those entries are also the only ones that say “Private Sale” — all the other record-breaking sales (perhaps with the exception of one) were done through major auctions (usually Sotheby’s or Christie’s).

The Times piece paints Lik as a savvy entrepreneur who has no background or interest in art other than his own. How Lik feels about Ansel Adams’ work may ruffle many a feather in the photographic world: “Just a nice shot of Yosemite. Right place at the right time.”

The buyers of Lik’s work are also characterized as people with money to spend but very little understanding of fine art and the true value of what they’re purchasing.

Regardless of how you feel about Lik and what he’s doing with his photography, it’s clear that he has figured out a system that works for making serious money with photography — his camera has allowed him to develop a side hobby of buying and selling luxury homes worth tens of millions of dollars.

Thanks for sending in the tip, Jack!