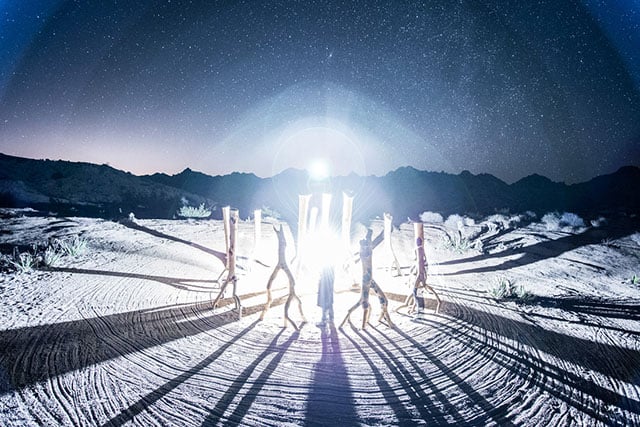 Multimedia artist Jeff Frost sold his major masterwork, “Standing in the Circle” in photograph form to a collector for 6.5 million dollars and ten cents last week, exceeding by one single dime the previous world record of 6.5 million recently set by Peter Lik Photography.

Frost commented, “We — my team and I — realize that this is going to seem incredible given the fact that the world record had just been set, but the dollar amounts being so close is pure coincidence. Near the end of the negotiation phase I made an offhand remark that I would not sell the piece to my anonymous collector unless I received 10 additional cents. Obviously I was joking, but the collector -showing his good humor- dutifully paid 6.5 million dollars and 10 cents. He even made the last zero on the check a smiley face, if you can believe that. It just so turned out that Mr. Lik was selling his piece at the exact same price. We realize that the odds are completely out of this world, but this is very real, I assure you. No one is more shocked than my team and I.”

This incredibly coincidental and unprecedented event will be sure to rock the art world for years to come. Frost explains the work as a conscious invention of culture as a creative act. The installation depicted in the photograph exists in the desert near Joshua Tree, California. Frost says that it is intended to be a place where people can make up their own rituals for whatever purpose they want, free from dogma, in order to more clearly see the beauty in life.

The collector wishes to remain anonymous for antisocial reasons. Sale can be confirmed through the buyer’s counsel, Goodman Saul (505) 503-4455.

Frost has come a long way from his plentifully humble upbringing on a Mormon farm in Utah to selling the world’s most expensive photograph. Along the way he pursued a music career, playing in major indie venues all up and down the Sunset Strip in Hollywood only to find that he was on the wrong path. Just eight years ago he switched gears from music to art and has taken the world by storm. He is best known for his recent film, Circle of Abstract Ritual, which was constructed frame by frame from 300,010 photographs. This year he was chosen as one of ASMP’s Best Photographers of the Year, and he was almost an Eagle Scout.

Editor’s note: This is a parody of the press release put out by Peter Lik.