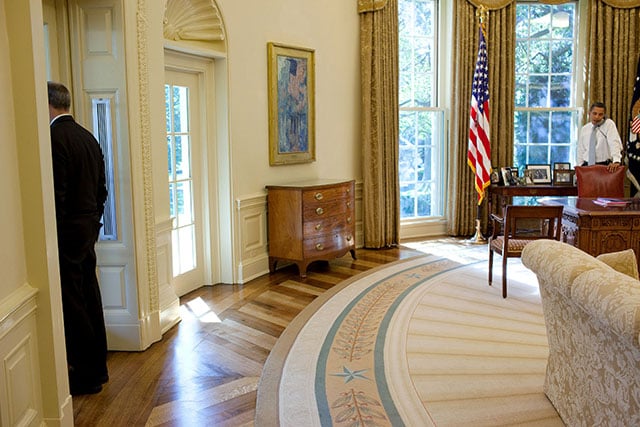 Prince William visited the White House yesterday and held his first talks with President Obama. Photographers and reporters were given a special warning by the White House before entering the Oval Office and participating in the media frenzy: don’t take any selfies with the president and the prince.

The Telegraph reports that Obama’s aides decided to issue the “polite but firm” selfie ban after what happened this past February when French president François Hollande visited the Oval Office.

During that event, an “excited group” of French journalists snapped photographs of themselves with the two heads of state in the background, creating some viral “Les selfies” images… and some grumbling from the White House. One of the selfies was snapped by journalist Thomas Wieder of Le Monde:

Apparently Obama’s aides decided that this type of behavior was not appropriate inside the president’s formal office, hence the ban. “[…] the British press were better behaved than their Gallic cousins and no selfies were taken,” says The Telegraph.

There was some smartphone picture taking, though:

WH press pool struggles for position in Pres Obama photo op with Prince William. Imagine if Kate were along. pic.twitter.com/OxVEb8Icza

Earlier this year, the White House wasn’t very pleased when another selfie taken with the president was used to promote Samsung cameras.