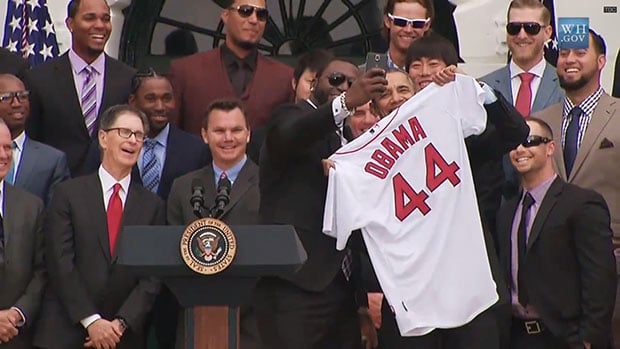 President Obama may want to think twice now before casually approving a selfie with a celebrity. A self-portrait taken with Obama by Red Sox baseball player David Ortiz is being used by Samsung as a promotional pic, and the administration isn’t happy about it.

The Red Sox were visiting the President at the White House this past Tuesday to celebrate their World Series victory, and Ortiz was given the privilege of handing an honorary Red Sox jersey to Obama.

After posing for some press photos, Ortiz asked if he could take another picture with his own phone. “He wants to do a selfie. It’s the Big Papi selfie,” Obama responded before posing for the picture:

What an honor! Thanks for the #selfie, @BarackObama pic.twitter.com/y5Ww74sEID

Shortly afterward, Samsung USA shared the photo with its 5+ million US followers:

Big Papi, Big Selfie. RT @DavidOrtiz What an honor! Thanks for the #selfie, @BarackObama pic.twitter.com/3I7ckLjquf

The photo soon began to draw controversy after it was revealed that Ortiz is actually sponsored by Samsung through a promotional deal. It’s a contract the baseball player acknowledges, but he insists that the unexpected selfie was in fact spontaneous and not part of a marketing stunt.

ESPN quotes Ortiz as saying, “It wasn’t anything promotional, anything like that. I mean, who knows that you’re going to take a picture with the president? […] It was like, ‘Oh, wait a minute, let me see if I can get away with this.’ I was lucky that I was right there.”

According to CBS, the White House is making it clear they’re not pleased with the possibility that the photo may have been a stunt. Press Secretary Jay Carney is quoted as saying, “as a rule, the White House objects to attempts to use the president’s likeness for commercial purposes, and we certainly object in this case.”

Samsung is becoming quite skilled at using celebrity selfies for promoting its brand. You may remember that Ellen DeGeneres shot her own “spontaneous” selfie back at the Oscars last month using her Samsung phone:

If only Bradley's arm was longer. Best photo ever. #oscars pic.twitter.com/C9U5NOtGap

The photo quickly became the most retweeted photo in the history of Twitter, amassing over 3 million shares. Interestingly (and ironically) enough, after that photo appeared, Obama was quoted as saying it was a “cheap stunt.”