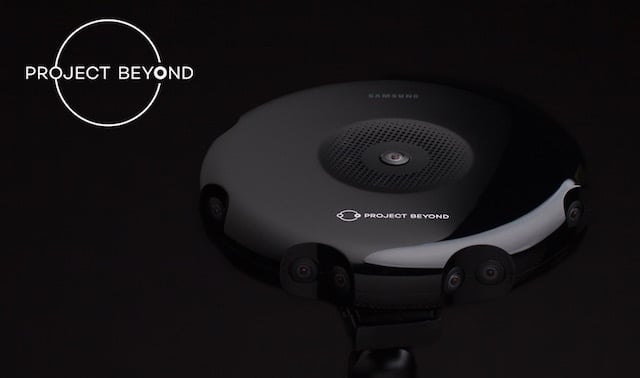 Today, at its 2014 Developer Conference, Samsung unveiled Project Beyond: a camera capable of capturing true 3D video in a full 360-degrees. The saucer-shaped design captures a gigapixel of 3D footage every single second! Which sets the stage for Samsung’s endeavors to make virtual reality more realistic than ever.

The camera, whose footage is designed to work seamlessly with Samsung’s own Gear VR headset, packs quite a punch inside its considerably small form factor. Along the outside of the device, there is an array of 16 Full-HD cameras, each of which have an ultra-wide-angle lens attached.

Beneath the camera is the device’s processor and storage, which includes a means of high-speed connectivity to get the footage off the camera and onto other devices. An image sensor and controller is placed between the camera arrangement to ensure Project Beyond captures everything exactly as planned.

Those who have already tested out the pre-recorded footage on the headsets are saying it’s an impressive setup, with The Verge reporter Nathan Ingraham saying, “it’s definitely a wildly immersive experience, if not quite as impressive as you’d hope for.”

There’s no word on when this device might make it into the hands of consumers, if that’s even Samsung’s goal with this camera, but the tech is being shown of, and just knowing it’s out there is enough to get a little excitement flowing.