Nikon’s newly-announced D750 has impressed those who have managed to get their hands on it thus far, but to properly put it through its paces, DxOMark ran it through its trusted sensor tests.

As expected, it came out with quite high marks, putting it in 8th place on DxOMark’s overall rankings and making it the 6th Nikon camera to make it into the top 10.

The new 24.3-megapixel sensor inside the D750 performed well, if inconsistently. DxOMark says the performance varied quite a bit throughout the tests, but overall, the three scores come across as ‘excellent,’ with Dynamic Range being its biggest strength at a whopping 14.5Evs, second only to the Nikon D810. 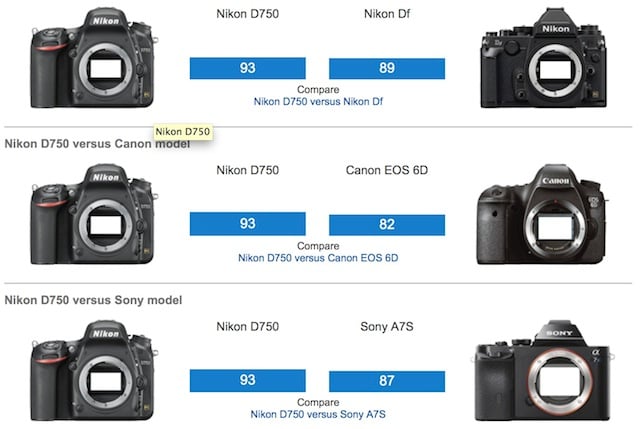 As for low-light performance, the D750 ranked 8th place overall, very similar to the D600 and D800E sensors, and nowhere near as capable as Nikon’s low-light champ, the Df.

The D750’s weakest spot is color depth, which came in 14th place overall with a score of 24.8 bits, but even that isn’t bad considering it’s the same score as the popular Sony a7.

Between the three tests, the D750 averaged out into 8th place, making that top ten list seem pretty yellow from our vantage point. To read the full review and see how the D750 stacked up against its stiffest competition, head over to DxOMark by clicking here.

Portraits of Power: Overlapping Portraits of World Leaders Reveal the Composition of Power