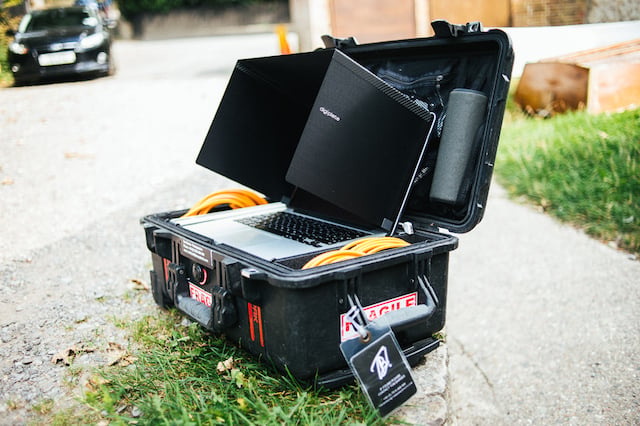 For years and years I’ve worked on location, slowly I’ve moved over to tethered shooting and past two years I have been trying to shoot tethered as much as possible, I’m a big fan of it and I find it can really help a shoot and improve the images overall when everyone knows what they are working towards.

For those of you who aren’t up to speed on tethering it is effective connecting your camera to your computer and shooting to the hard drive on the computer rather than the memory card on the camera. There are a variety of advantages to using this method (speed, accuracy and client feedback amongst them) but there are hundreds of articles on various blogs about tethering so if you want to start using it just give it a google search. This post will be focusing on my case rather than the principles of tethered shooting.

When shooting tethered in and outside of the studio it was always a bit of a nightmare, you’d have loose cables, chargers and no stand or case to keep your laptop separate from the ground/surface so if somebody spilt a drink for example it would drown your computer/drives/cables etc.

The first place to start on the redesign was to figure out the right case for the job, for me this one of the easiest decisions. I knew I wanted it to be in a hard case, I have two rules for bags/cases, if I need a soft bag I use Thinktank and if I need a hard case I use Peli (Pelican in the USA) For this build I wanted to keep it relatively compact so I used a spare Peli 1510 I had in my store-room. It’s an ideal case for this, made out of high impact plastic it’s basically indestructible with wheels! 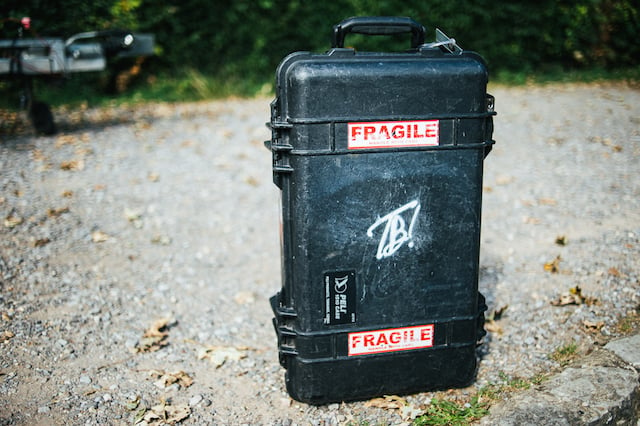 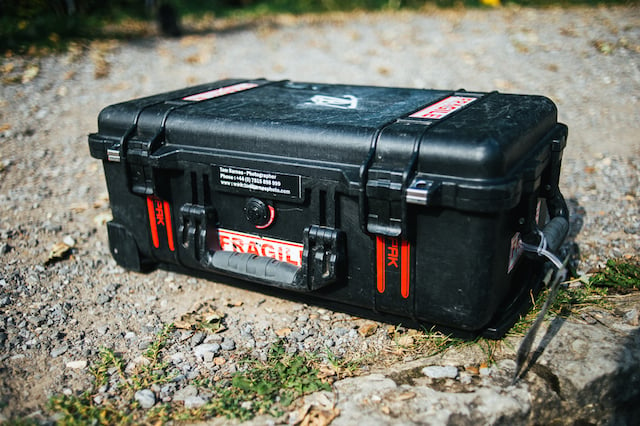 Originally I had I found an old tutorial by a photographer in the USA about a converted Peli laptop case and thought it looked like my best option, I built my own but upgraded various bits (I discarded the standard Peli inserts and used a custom CNC version specifically cut to size for my laptop but after using V1 for about a year I decided that it was too small / restrictive and decided that it was time for an upgrade to V2.

V2.0 started off as rough sketches and a list of requirements after the failings of V1, I needed much more storage space for cables, card readers, batteries and hard drives as well as a few new additions to the case to make the workflow easier and shooting easier.

As I was going to base the whole case around a computer I decided to buy a new retina MacBook Pro, I heavily customised one of the retina 13″ models, I’m trying to be a bit more sensible with gear so I took the power hit on the smaller model so I could save some weight (1kg roughly) the power hit is annoying but I rarely edit on the road and instead prefer to wait till I get back to my full Mac Pro edit suite in the office (you can see the construction of that here) the 13″ runs Capture One absolutely fine and that’s all I really need it for. The laptop is fitted inside a clip on Speck hard case to stop it from getting knocked about and scratched up.

Now to the more fun stuff, the case contents…

In the lid of the Peli case I have the standard Peli 1510 lid organiser attached, it contains the more useful small bits of kit, things that help on shoots, these include: 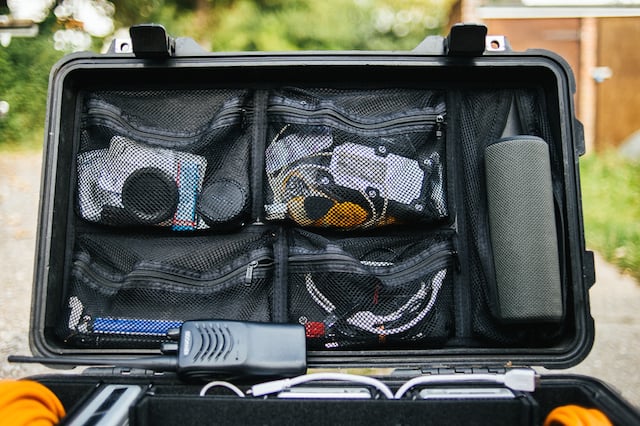 On the right hand side of the lid organiser there is a long area for a UE boom Bluetooth speaker, I normally have two of these on location shoots, you can set them up together and have music all over your shoot. I always rave about having music on shoots, it completely changes the vibe and these Booms are powerful enough, sound great and are very lightweight (they also charge over USB, making them perfect for travel setups) 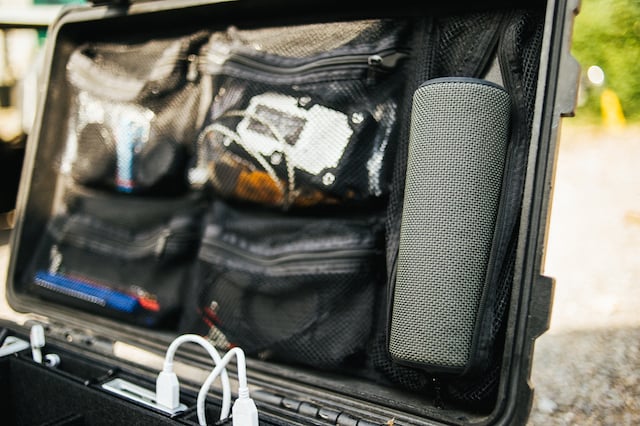 The inside of the case is formed of some custom dividers, it’d taken me ages to try and figure out how to do the inside of this case as CNC on a case of this size wasn’t a good idea as I needed strength, rigidity and lots of space – I had thought about foamed wood but nothing was working for me, then about a year ago I discovered an awesome company called Trekpak from Denver in the USA, they are a bit of a life changer if you have a lot of cases/equipment.

They make a solution for photographers/videographers who’ve struggled to find a good alternative to those Velcro dividers we get in bags. It’s heavy duty (but lightweight) plastic with a foam layer on either side for protection, it’s a simple idea but executed brilliantly. It’s super straight forward to install, use and most importantly reconfigure using their bloody clever pin system. It’s this system that has formed the structure of the lower part of the case and basically made it possible. 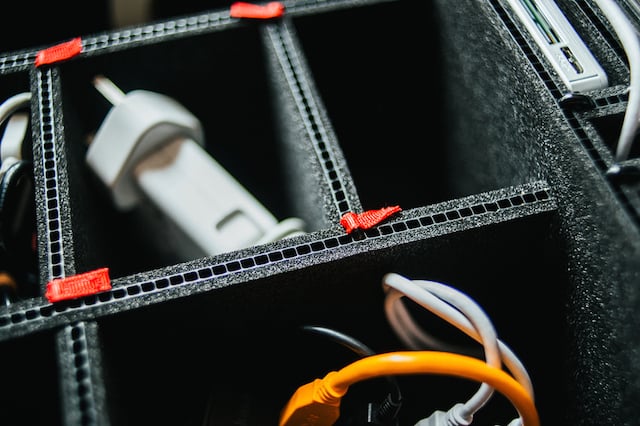 I planned to have two levels in the case, one level in which the laptop sits and then the lower level below which contains the more boring bits like chargers, spare cables etc. This style of setup keeps cables etc out of view and makes whole case tidy. Having multiple levels also helps to utilise the majority of the space inside the case as it is quite deep. 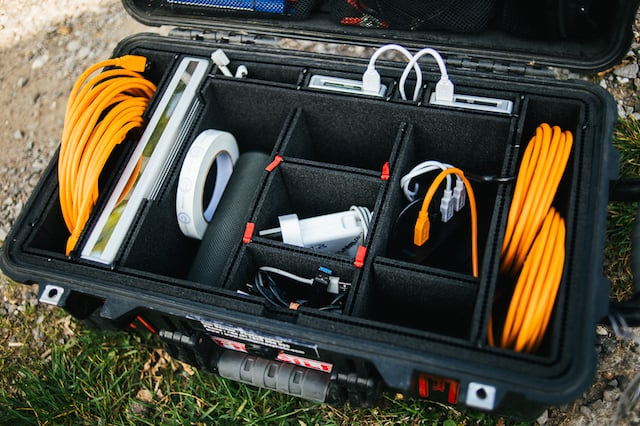 To the left of the computer is a large area the full depth of the case, this contains one of the Hypermac 222WH external MacBook battery, this huge battery means I can get three or four full extra charges out of my MacBook Pro and this helps me shoot for a whole day without external power. The extra cabling is hidden away to try and keep the case neat. The battery is so large that to use it you have to stand it on its end in the case, this is probably the most annoying design bit of the case but I can live with it and luckily this also helps keep it cool. 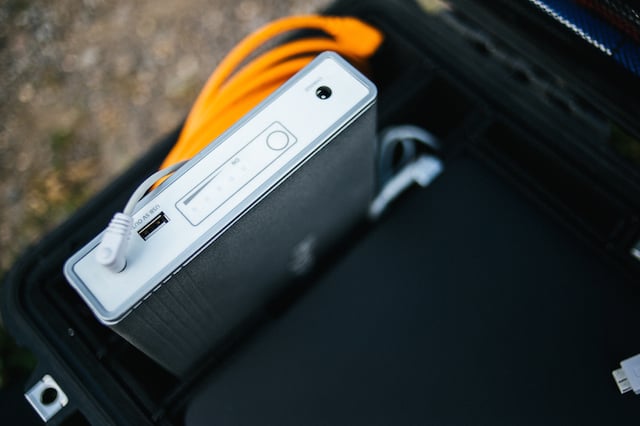 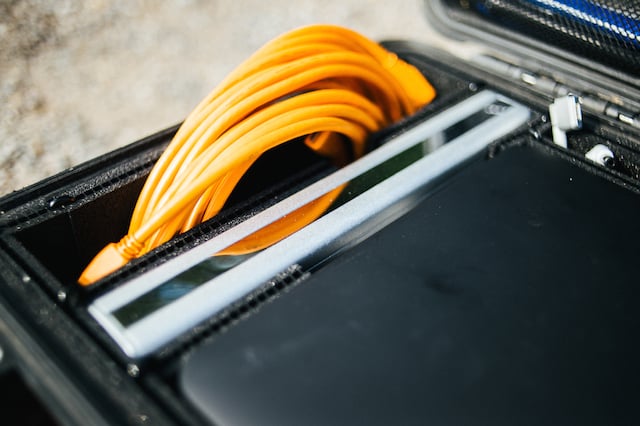 To the left of the battery is another large area for some of the tether cables, I use the long orange cables from a company called Tether Tools, in my experience these are the most reliable. I carry a USB 3.0 for my Leaf system, a USB 3.0 cable for my backup Nikon system, an active USB 3.0 5M extension cable and a FW800 cable which is a backup for the Leaf system. It’s quite a few cables but I know I’m covered should a camera or cable fail. These are also stored in the area on the far right of the case to the right of the computer.

At the back left of the case is the Sandisk USB 3.0 card reader, not used too often as I try and shoot tethered but for jobs where that doesn’t suit then this is useful to have.

Underneath the computer is the more boring stuff, MacBook chargers, a USB 3.0 hub, extra cables and all the extra cabling for the hard drives. 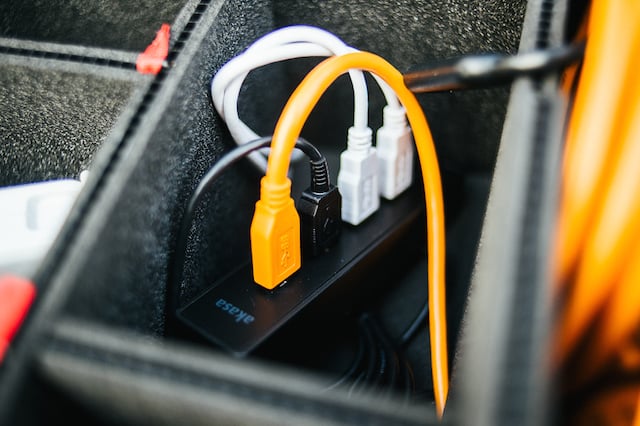 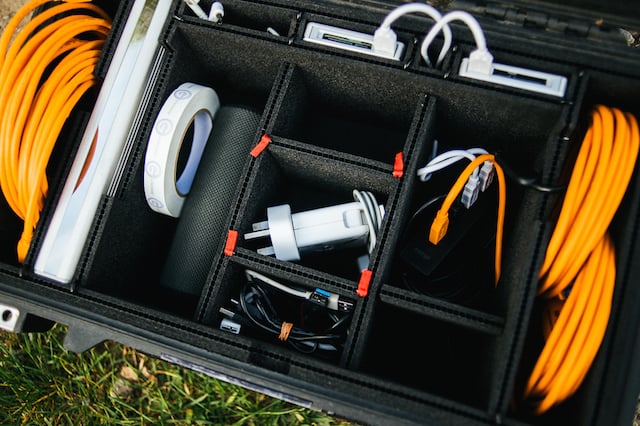 On the top area of the case behind the laptop is one of [if not the most] important part of the case, the hard drives. I use the G-Drive ev SSD drives (512GB Capacity) from G-Technology for my working drives, this case is outfitted with two of these drives linked into the USB hub. These drives are one of the main advantages of having a case like this wired up. 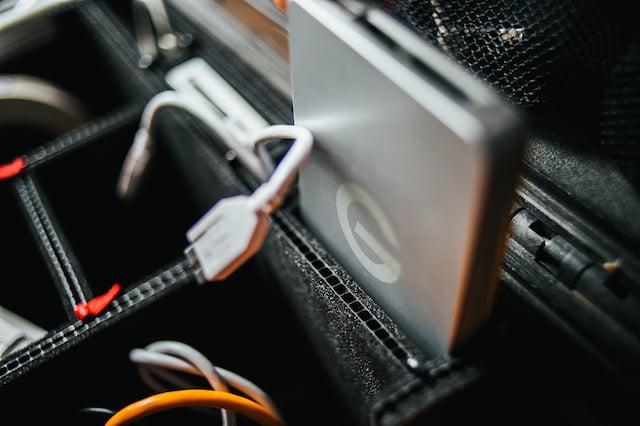 If you aren’t familiar with ev series from G-Technology it is based around their G-Dock which is one of the most useful workflow tools I’ve used, it means when I can get back into the office I can simply slot these location drives into the dock and copy them over to my RAID system in a couple of minutes rather than waiting ages to transfer them off the laptop etc. (If you want more details about my workflow I will be posting a blog solely about storage in the next couple of weeks)

When the case is opened, setup and being used these hard drives are my real time backup system, every file that gets taken will be sent from the camera to the computer and will automatically be copied to each of the external drives (via an Automator script – this will be covered in a blog all about storage that will be released soon).

I was planning to originally use the 1TB ev drives but after moving the case around I decided to move up to the SSD drives for performance, power and heat reasons (no real heat generation due to no moving parts meant that I could tuck the drives into a very small area of the case with no ventilation and not have to worry about shortening the life of the drive) 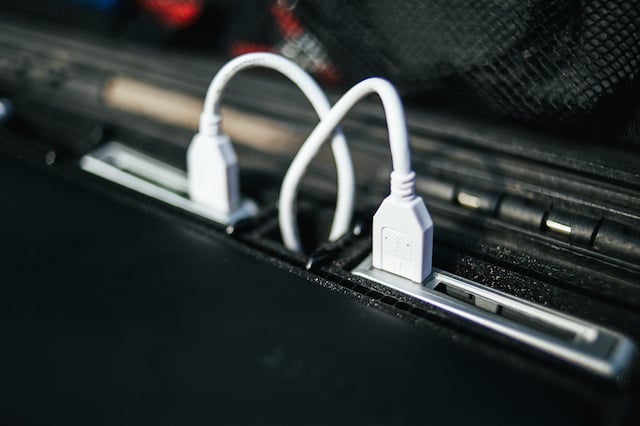 At the end of a shoot I disconnect the hard drives and pack them into separate cases for security, having multiple copies in different locations means that my data is safe. Once I get back to the edit suite I can unload the files from the main SSD working drive by plugging it into the G-Dock on my desk, making the most of SSD and Thunderbolt. These SSD drives run at about 400mb/sec over USB 3.0 but when plugged into the G-Dock I get speeds of 480mb/sec over the thunderbolt connection.

To round the setup off are a couple of peripherals that help with general editing, there is a screen shade that magnetically attaches to the Macbook screen, this is made by a company from the USA and is the first screen shade that I’ve seen to be this compact, it folds completely flat for transport and fits on top of the laptop. There is also a small Wacom Intuos Pro graphics tablet for quick retouches or mobile office work (when I’m editing in hotels etc) Both of these are flat and stack up on top of the MacBook Pro, which lets me just close the case on top of it all. 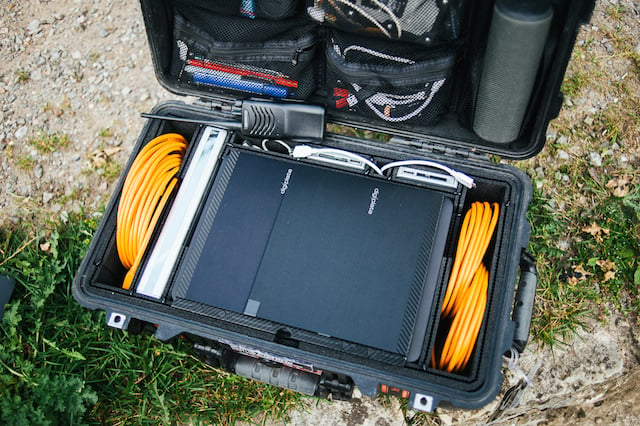 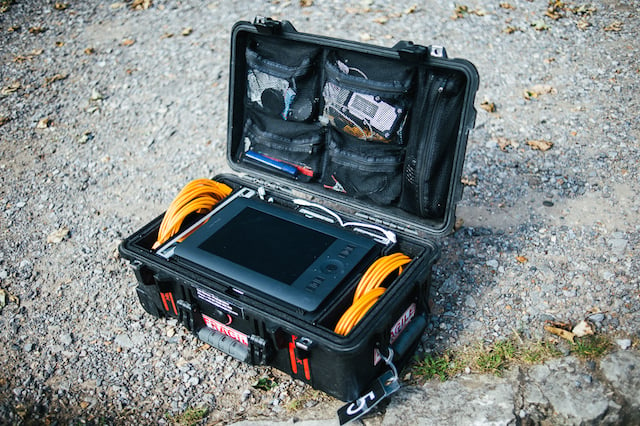 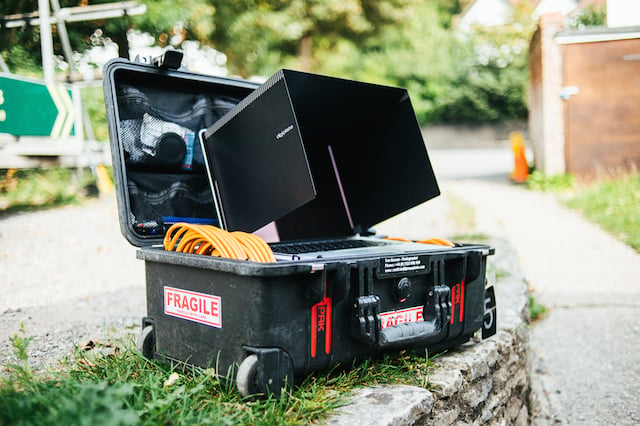 All in all a very efficient and tidy way of transporting and using a mobile office whether you are working in the studio with power or location without.

About the author: Tom is a self taught London based portrait photographer. Primarily working worldwide shooting press shots for music artists and magazine commissions. Tom has worked with a strange varied set of subjects from criminals to classical pianists, computer hackers to champion boxers.

HTC Unveils the RE, A Periscope-style Action Camera for Capturing Everyday Life