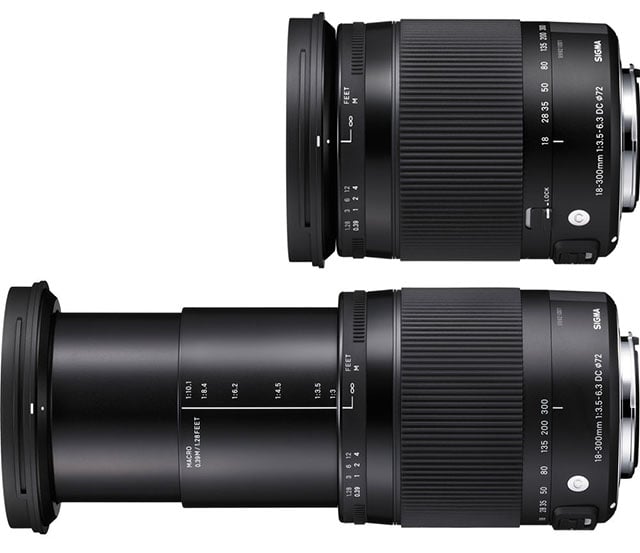 Sigma has announced a new 18-300mm f/3.5-6.3 DC Macro OS HSM lens, an “all-in-one” lens that’s designed for photographers who hate switching lenses but want to cover all their bases when it comes to focal lengths.

The 16.6x zoom lens, which falls in the brand’s ‘Contemporary’ roster, is designed for APS-C format (i.e. crop sensor) DSLRs, and has a full frame equivalent focal range of 27-450mm.

At its widest side, the lens is extremely compact. Zoom in all the way and the lens will grow to nearly double its compact size. The filter size is 72mm, minimum focusing distance is 15in, and the maximum magnification ratio is 1:3.

If you have a Sigma USB Dock on hand, you’ll be able to make customization and performance adjustments to the lens without having to send it to a service center.

The 18-300mm will be available for Sigma, Nikon, Canon, Pentax, and Sony mounts starting in October 2014 for a price of $579 (the Sony and Pentax versions won’t feature optical image stabilization).

In addition to the 18-300mm, Sigma has also announced a pair of 150-600mm f/5.6.3 DG OS HSM lenses. One is part of the company’s ‘Contemporary’ lineup, and the other is found in the ‘Sport’ lineup. The Contemporary lens is geared towards being compact and portable, while the Sport lens is designed for professional photographers who find themselves in harsher and faster-paced environments.

The Contemporary lens features a sealed mount, but the Sport version of the lens has sealing on the body itself that makes it dust and splash proof.

The Contemporary lens has 20 elements in 14 groups on the inside, while the Sport lens contains 24 lens elements in 16 groups.

Features shared by both lenses include water and oil-repellant coatings on the front and rear elements, optical image stabilization that uses an accelerometer, zoom lock and manual override switches, enhanced autofocus algorithms, compatibility with the Sigma USB Dock, and quiet and speedy AF.

Pricing and availability have yet to be announced for both of these lenses.

Finally, Sigma has also announced two new teleconverters: the TC-1401 1.4X and the TC-2001 2X. Both are dust and splash proof with autofocusing up to F8.