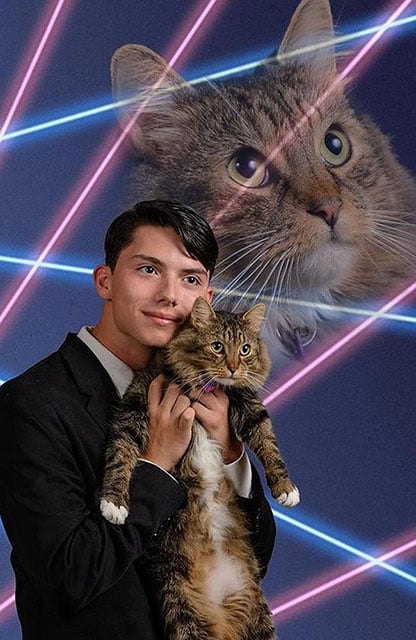 More often than not, when we look back at old yearbook photos, we cringe at the outfits we wore, the poses we’re in and even the hairstyle that adorned our dome. That likely won’t be the case for 16-year-old Draven Rodriguez, whose trying to achieve the… purrfect yearbook portrait.

With glorious lasers in the background, a ghostly overlay of his cat Mr. Bigglesworth overlooking the entire image, and Mr. Bigglesworth in his arms, Rodriguez truly outdid himself here. But, as wonderful as we may find his yearbook portrait to be, his school isn’t very keen on the idea of the photo gracing the pages of its yearbook.

A spokesperson for the school distract tells The Daily Gazette, “[the photo would] obviously be very different from the others.” While there are no definitive guidelines for portraits to be included in the yearbook, the vague outlines state they should be “professional-type head shots” which represent “consistency and decorum of the section.”

As of now, the school has yet to officially decline the photo. However, in the case that they do strike down the image, Rodriguez is prepared. Through an online petition platform, he has already amassed over 3,500 signatures from supporters.

Regardless of whether or not this meme-ridden portrait makes it into the yearbook, it’s an image that’s sure to be remembered in the annals of yearbook portraiture.

(via The Daily Gazette via Digital Trends)