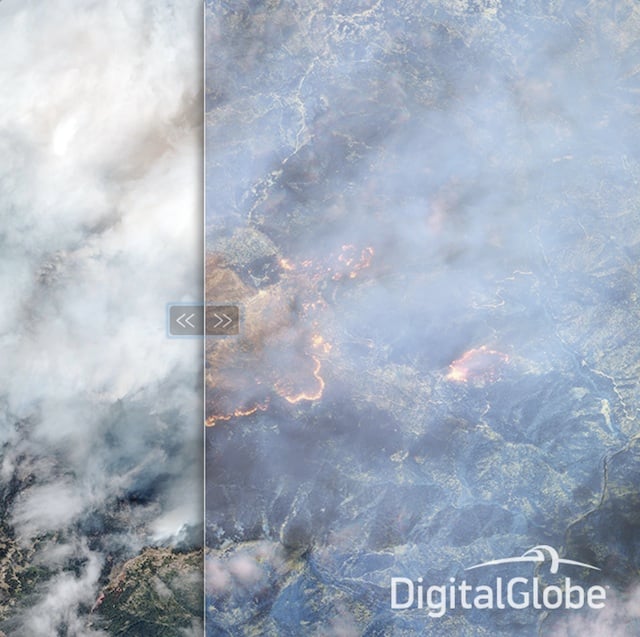 DigitalGlobe really wants people to get behind their super-high res public imaging satellite, the WorldView-3, and understand just how useful it could be. To that end, they’re showing off the satellite’s capabilities once again, this time using the onboard infrared sensor to see beneath the smoke of a California forest fire and capture some incredibly detailed images of the inferno.

The pictures were taken using the WorldView-3’s shortwave infrared (SWIR) sensor, which doesn’t have the super high-resolution of the sensor it used to capture these images of Madrid, but is still no slouch.

Last week, when the satellite was flying over California’s Klamath National Forest, the DigitalGlobe team switched to the SWIR sensor and started snapping photos of the fire beneath the smoke. Areas that were completely obscured all of a sudden show up, not exactly crystal clear, but not far from it: Interestingly enough, the images above (which you can interact with on the DigitalGlobe website) aren’t actually full resolution. The SWIR sensor boasts 8 bands, and only 6, 3, and 1 are used to create the false-colored image with the orange fire.

Below is a photo taken using only band 8, that has the best smoke penetration of them all: There are more sample images, an interactive version of the top image, and a lot more info available over on the DigitalGlobe website here. And if you’d like to see what the high-res satellite can do when there’s not smoke in the way, check out our previous coverage of the WorldView-3’s Madrid pictures.

These Were the First Wildlife Photographs Published in National Geographic