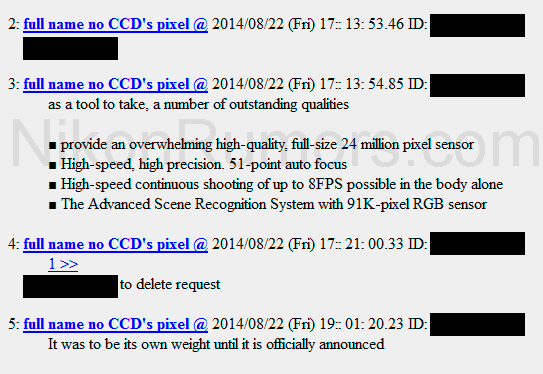 We’ve known for a few weeks that a Nikon full frame camera is in the works. In our previous coverage we’ve shared some of the initial specs and a reported confirmation of the name, but today we have a few more thanks to a screenshot acquired by Nikon Rumors.

While the above screenshot doesn’t make note of these specs being for the D750 specifically, it’s concluded these are for the upcoming camera considering the context clues around the information in the screenshot.

According to the screenshot, the D750 will sport 51 AF points, a frame-rate of 8fps, and will feature TTL exposure metering through the use of a 91k pixel RGB sensor (the same present in the D800 lineup).

Nikon Rumors does note that this screenshot was acquired online and could very well be wrong. But from the looks of it, these specs line up well with previous suspicions regarding the rumored action/sports-focused camera.

With Photokina just around the corner, the wait shouldn’t last much longer, but we’ll be sure to keep our eyes peeled and update you if any further information leaks ahead of official announcement.

Make Long Wedding Albums a Fun, Quick Watch by Turning Them Into an Animated Sequence