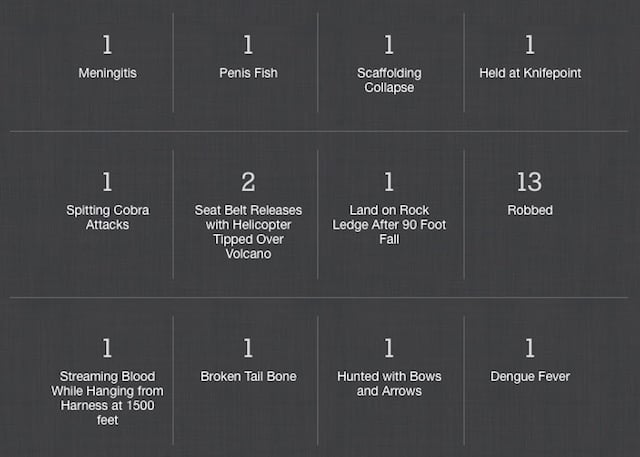 The Photo Society, a website run by a collection of National Geographic photographers, took the time a while back to put together a wonderful little tribute to photographer Wes Skiles, who passed away doing the work that he loved.

In tribute, the photographers compiled a ‘Reality Check’ list of all the crazy, strange and sometimes horrifying things that have happened to them on the job.

Skiles was a pioneer of cave diving, an underwater cinematographer and an all-round explorer, both for himself and through a number of assignments for National Geographic, so it was only natural that this was how they pay homage to the kind of life he chose to lead.

Some of the incidents that made the list seem fairly common, considering the assignments NatGeo photographers cover, but some of them are just straight up unusual and scary.

Take for example the time a photographer was bit by a tick… on his private parts. Or maybe the time two different photographers were attacked by the same Florida panther on two different assignments. And if that doesn’t do it for you, don’t worry; there were also two times that a photographer’s seatbelt came unbuckled as they were inside a helicopter that was tipped on its side over a volcano.

It’s an interesting collection of incidents; one well-worth taking a look at in its entirety. So head on over to the page, linked below, to see the entire collection.

The Hazards of Being a National Geographic Photographer [The Photo Society]

What Photographers are NOT Considering When Using High ISO