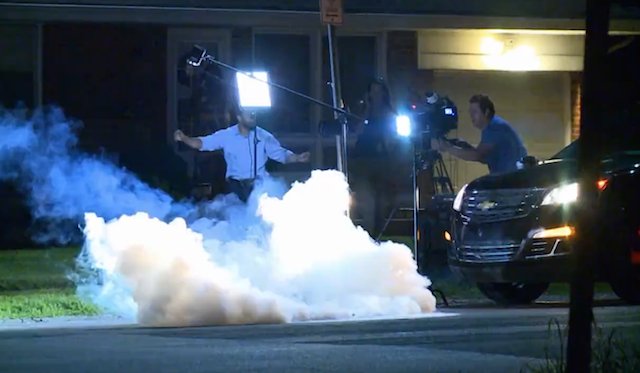 I am troubled by what I have seen.

In recent weeks, we have witnessed terrible, on-going episodes within our borders through photos and video that speak volumes about the tragedy of race. Racism is as old as human history, and there is a long, rich history of capturing race conflicts in the US by photographers like Charles Moore, Bruce Davidson, Gordon Parks and others.

But in this post 9/11 world, the balance of power has shifted towards authority — militarized officers outfitted with high-powered machine guns and body armor straight out of central casting for a Michael Bay film who seemingly police differently depending on the color of your skin.

This image by Charles Moore published in LIFE magazine changed history. Kennedy adviser Arthur Schlesinger commented that the image “transformed the national mood and made legislation not just necessary, but possible.”

In her seminal essay On Photography, Susan Sontag writes “Photographs alter and enlarge our notions of what is worth looking at and what we have a right to observe. They are a grammar and, even more importantly, an ethics of seeing.” Photos and video are crucial to a functioning democracy, but if we’re too immune by the barrage of our digital world, what hopes do we have for society?

In Russia, the car dash cam is ubiquitous because of the level of lawlessness and corruption. Witnesses are shills, cops are corrupt, and dash cam footage provides the only factual account of crashes, bumps and dents. In other words, photography/videography is the only means to fight corruption. In the US, we continue to find inequality in the treatment and incarceration of blacks. Will photography help us to uncover this disparity and turn disbelievers into advocates? Can photos spur not only regional outrage, but national outrage and create a transformative dialog?

How will these three photographed events shape our world?

Irrespective of which side of the aisle you sit, you have a constitutional right to take photos in public places including places of government. When NJ resident Steve Ronko tried to file a Open Public Records Act request with camera in hand to get information about an animal shelter, Officer Richard Recine challenged his constitutional right.

Recine is caught on video saying, “Obama has decimated the friggin’ Constitution, so I don’t give a damn. If he doesn’t follow the Constitution, we don’t have to.” Police officers swear to uphold the constitution with an Oath/Affirmation, and the Constitution is an imperative vehicle for upholding our rights as citizens. The police cannot selectively choose to defend the Constitution based on mood. Although we’ve seen story after story about this, the NYPD apparently felt that its officers needed a reminder.

Were it not for the citizen journalism, the police report would have merely indicated an individual resisted arrest and then died upon being transported to the hospital. Instead, not only do we see an unarmed man with a history of arrest for selling loose cigarettes being forced to the ground and complaining of not being able to breath, we also see EMTs not even attempting to revive an unconscious victim.

Although the case is pending, we have at least seen some lip service given to the issue. Mayor Bill de Blasio declared that is “looks like a chokehold to me,” and Police Commissioner Bill Bratton ordered an extensive training review. But Staten Island where Garner was killed has the highest number of most-sued cops despite having the smallest population. So barring a more aggressive effort on the part of Internal Affairs or the FBI, citizens will have to continue to be vigilant to ensure that police are evenly protecting the community rather than assaulting it.

3. The Death of Michael Brown in Ferguson

There are no photos or video of the incident itself. There is a dispute as to what happened. But what isn’t in dispute is that an unarmed teenager was shot dead by a policeman in St. Louis, a city with a rich history of racism and segregation. What we do have photos of is the police reaction to an upset community like Scott Olson’s photo of a man with his hands raised approaching what looks like a SWAT team, but is just the every day Ferguson police force.

Ferguson isn’t a war zone. This is not Gaza, Donetsk, or Damascus. This is St. Louis. The response is disproportional to the threat. Protesters are being tear gassed on their private property as captured by Rich West.

Journalist Ryan J. Reilly was arrested in a Ferguson McDonald’s after taking a photo of a cop.

“They essentially acted as a military force. It was incredible,” Reilly said. “The worst part was he slammed my head against the glass purposefully on the way out of McDonald’s and then sarcastically apologized for it.”

What exactly was the threat in the McDonald’s again? Since when did obesity and high cholesterol require a police force?

17-year old Tyler Atkins challenged the media’s portrayal of the black victim with a tweet and the hashtag #If TheyGunnedMeDown. His diptych shows photos of himself with his saxophone and another as a rapper that he made for a school science project.

The tweet was in response to the widely circulated photo of Brown flashing the peace sign, but who some in the media portrayed as a gang symbol.

That a teen wanted to appear cool shouldn’t be an indictment of his character. If a Japanese girl made the same gesture, how would she be portrayed by the media? Can a black teen be treated like a white teen? Can we eliminate the highly polarizing and race-loaded words of “thug” and “gangster” for blacks and “bro” for whites? Are we visually literate enough to be skeptical of images we come across in the mass media and social media because we know we’re being link baited for clicks?

The newspaper front page has been supplanted by YouTube and Buzzfeed. But the barrage of images shouldn’t numb us to this problem of race, it should inculcate us to the disparity in how different people of different races are treated in this country.

Let yourself be outraged by these images. Write letters to your representatives. Talk to a cop. Exercise your constitutional right to photograph that which ails your community. The community your deserve is the community you help build.

Did You Know: Studies Show People Believe They Look Like the Retouched Version of Themselves

Everybody Gets an eBook: 46 Photography eBooks You Can Have for Free