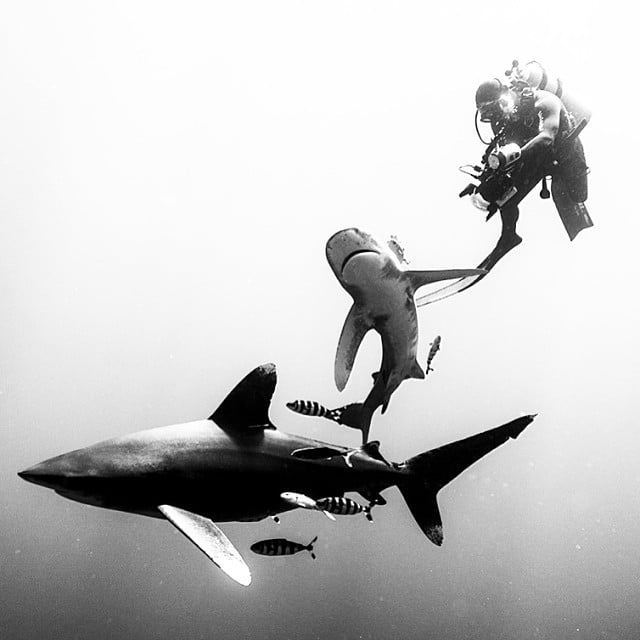 Shark Week, Discovery Channel’s very own opiate for the masses that seems to be about as addictive to people as crack, is only a couple of days away. And during that week, renowned celebrity photographer and gutsy #cagefree shark photographer Michael Muller will be running Discovery’s Instagram from Mexico, snapping and uploading the kinds of toothy photos shark week addicts can never get enough of.

So, before we let loose the terror and adrenaline, let’s meet this talented photographer who brought studio quality lighting conditions to the underwater world of sharks, and left the cage behind.

First, let’s clarify: when we say he left the cage behind, we mean it. This is one the photos he uploaded to his Instagram three weeks ago, hashtaged with a simple-yet-scary #cagefree:

The man has… we’ll call them orbs. He’s got massive orbs. Because while most people would do anything to avoid a situation in which they’re surrounded by sharks in open water, Muller actually dreams of being there when he’s photographing celebrities for his day job.

Not that that’s surprising once you know his backstory. As he recently told Instagram:

I have always been a waterman and my first camera at age 8 was a yellow WEATHERMATIC waterproof Minolta camera my dad gave me. So I grew up from age 8-12 diving and snorkeling in the Persian Gulf off Saudi Arabia, then moved back to Northern California where I started surfing.

There are great whites all over the cold waters of Nor Cal so it was something always on our minds as surfers, Stinson Beach is notorious for Great White sightings and attacks so between that and JAWS I was obsessed with them from an early age.

His big ‘breakthrough,’ however, came about six years ago. “I was in the Galapagos with IWC Watches, the Charles Darwin Foundation and UNESCO doing a 3 week shoot,” he explains, “and got this level of fulfillment I hadn’t felt before.”

Since then he’s been hooked. He even developed his own underwater lighting rig that, he explains, sets his underwater photos apart from anything else out there:

In this area we are unique; our lighting is one of a kind. About six years ago I created and was granted 4 patents on today¹s most powerful underwater strobe system. Each strobe creates 1200 watts of power and I use up to 7 at a time. They are the exact same lights I use in the studio shooting commercial work and creating movie posters.

When I began shooting underwater, I assumed there would be strong lights to replicate my studio work; however, I discovered the best available were 400 watt lights that attach to traditional housings. My vision was to bring a Great White into the studio and shoot it with edge lights and top light, etc. Realizing that I couldn’t bring the sharks into the studio, I decided that I would have to bring the studio to them.

As for the results? Well, they speak for themselves. Here are some of our favorite shots he’s uploaded to his Instagram account:

But his work isn’t just about getting pretty pictures of sharks, it’s about raising awareness. Like George Probst, he doesn’t see sharks as any more dangerous than any other wild animal.

“The only time I get in a cage is when we are on the surface baiting Great White sharks, other than that moment there is no need for a cage.” he told Instagram. “The fact is that sharks are far more scared and skeptical of us, and with good reason. We are killing 100,000,000 sharks a year at this point. I have never even been close to being threatened by a shark.”

Be sure to tune in to Discovery Channel’s Instagram account starting Sunday to keep up with Muller as he photographs sharks in Mexico during Shark Week, check into the Instagram blog that same day to see him featured there, and visit his website to learn more about the man behind the camera.

Image credits: Photographs by Michael Muller and used with permission

PhotoDNA Lets Google, FB and Others Hunt Down Child Pornography Without Looking at Your Photos