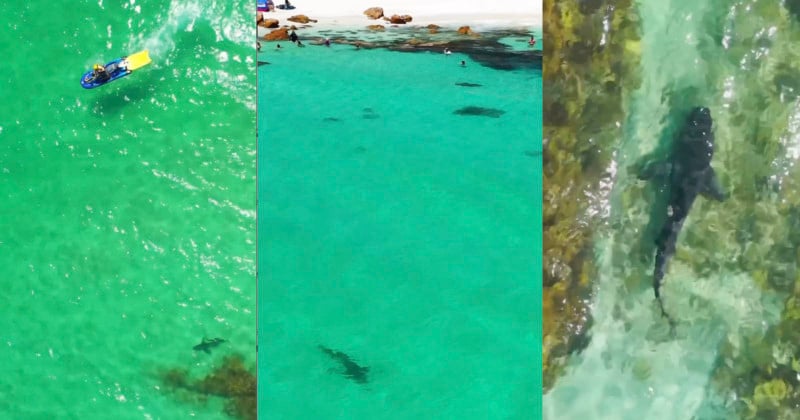 David Alphonso who regularly captures incredible marine wildlife videos off the coast of Australia was flying his drone when he spotted a huge shark close to the public.

His wife and child were on the beach close to the shark so he Facetimed his partner Kirsty to get to safety and alert the other beachgoers.

He then guided lifeguards on a jetski to the shark who confirmed it was a great white, called in a helicopter, and sounded the shark alarm which led to the closure of Meelup Beach in Western Australia.

“It’s a good job I had my drone up there,” David tells The Sun. “There must have been thousands of people on the beach.”

David says he wasn’t sure what species of shark it was at first but knew it was huge and swimming just 10 feet away from people and close to the shore.

“I fly with an iPad and I showed the lifeguard the screen,” he says.

“Apparently the shark was huge up close — and if it was in the shallows, it was looking for prey.”

“We have to remember it’s their ocean, without them the underwater ecosystem would collapse,” he writes. “Be aware, but don’t be scared of sharks”

David, who emigrated to Australia from the U.K. ten years ago, tells PetaPixel that he’s an electrician by trade and photography is a hobby.

“I love taking pictures of wildlife, it’s my passion,” he says.

When he’s not saving lives, David is capturing some of the remarkable wildlife that Australia has to offer.

He’s captured migrating blue whales cruising off the coast of Western Australia, as well as capturing humpback whales and dolphins.

More of David’s work can be found on his Instagram.