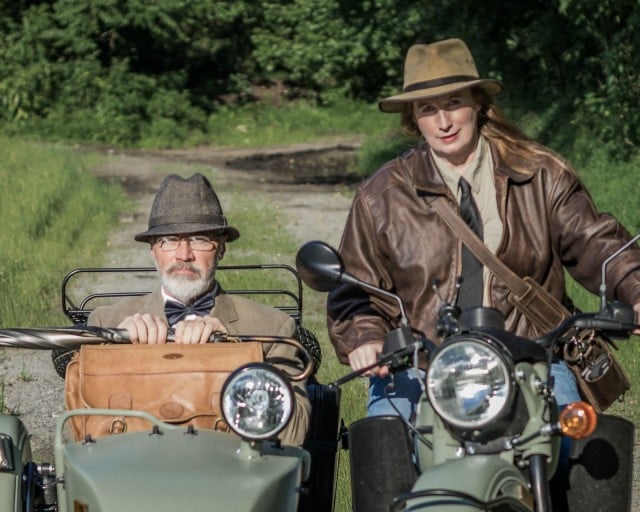 If you’re gonna do an anniversary picture, THIS is the way to do it. After hundreds of Redditors last year pointed out his resemblance to Sean Connery — thanks in large part to his penchant for fedoras and his grizzled look — ‘Hillbilly at Large’ and photographer Ken Thomas and his wife decided to capitalize on the look with a fun 21st anniversary photo.

Dressed up as Indy and Professor Jones, the two hopped in Thomas’s Ural motorcycle and sidecar and snapped what has to be one of the most creative anniversary pics we’ve ever seen — a photo that has since taken off like crazy on both Facebook and Reddit.

When we spoke with Thomas about the photo, he told us it was inspired by the image below, which went viral in its own right and sparked the avalanche of Sean Connery comparisons: Couple that with the fact that he had recently bought a 2014 Ural Gear-Up and that his friends often call him a “low-budget Indiana Jones” and you start to understand how the idea took shape. Here’s how Thomas describes the ‘brainstorming’ process that led to the shot, and its unexpectedly going viral:

The resemblance to Connery, the idea of reversing it by making her play Indy, and capitalizing on our ‘adventurous’ reputation among our friends, made us think that they’d find it hilarious. It’s probably important to note the target audience was our friends on Facebook. It was pretty popular there, getting something like 300 likes (which is a lot for one of my photos) then I shared it with the Facebook page for Ural Motorcycles, and they shared it, adding another 1000 likes and hundreds of shares. That’s when my sons started bugging me about putting it on Reddit. I was kind of resistant, because without either t*** or cats in it, I didn’t think it would do all that well. Goes to show what I know, right?

Thomas tells us that original plan for the photo was to recreate the iconic scene where Indy and Professor Jones are arguing and glaring at each other, but his wife would “burst out laughing every time she looked at me trying to do that Connery scowl.” They settled on glaring at the camera instead and the rest is Reddit history. As for how he actually captured the photos, Thomas was kind enough to share those details as well:

I’m an Olympus fan, and I shot it with an Olympus E-M1. I was trying to go for an old movie look, shot on film, so I used an old Olympus manual-focus OM lens, a 50mm f/1.4 that has gotten a little soft and fuzzy. Then I blurred it, grained it, and desaturated it in Lightroom. Looking at it now I think I probably overdid that part, but it was intended as a joke for our Facebook friends so I wasn’t worried about getting it perfect.

Image credits: Photographs by Ken Thomas and used with permission