An app called Anniversary is putting a new spin on remembering and reliving the visual moments we capture with our phones.

Rather than the usual method of instantly sharing an image or video on a social media network, Anniversary lets you share your memories with a friend on a future date of your choosing. The plan, of course, is to surprise the friend with a dose of nostalgia when they’re least expecting it.

The app was created by a pair of graduates from University of Delaware, Benjamin Klein and Kenny Wallach. As part of a business competition at school, the duo came up with the idea for Anniversary. The idea won, which subsequently left them with some start-up capital to work with. It’s the idea that fascinates us, though. In an age where we take and share hundreds of photos a month, rarely do we get to look back at the memories with those we created them with. Anniversary does just that by not only sharing the image with a friend of your choosing, but also by adding a social layer, allowing comments on the photo between you and the friend it was sent to. 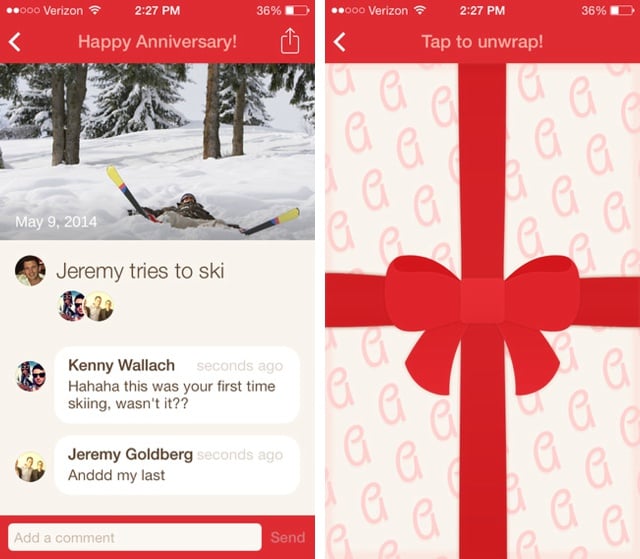 Imagine you’re out with your friends at a bar and something hilarious happens — one of your friends decides to sing karaoke. You video it with Anniversary and set it for the next morning, day, week, or month. It would be awesome receiving that picture and being able to chat about it, privately, with your friends.

In line with the rest of the mentality behind the app, Anniversary only allows you to share one photo at a time, making sure that only the best image of the memories are shared.

If you’d like to check out Anniversary, you can give the app a free download in the iTunes App Store.