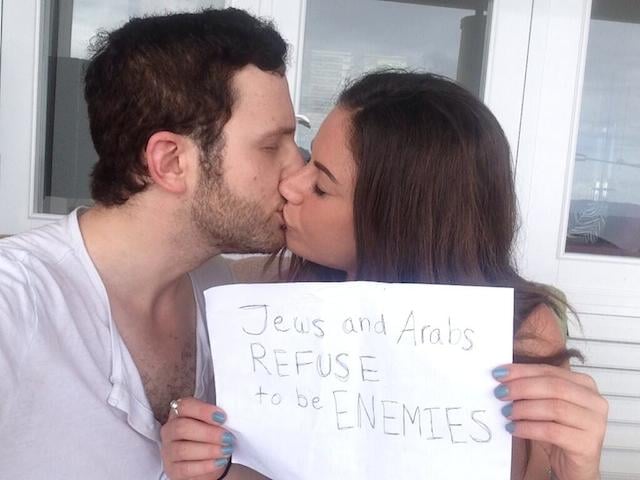 As clashes between Hamas and the Israeli armed forces escalate and the death toll climbs with heartbreaking consistency, a photograph of an Arab-American journalist and her Israeli-American boyfriend kissing has gone viral, sparked a Twitter movement, and become a symbol of peace.

In the age of social media, it no longer has to be a photojournalist’s camera that captures the photo that will come to define a particular conflict. In 1967, the photo that became a symbol of peace and ‘flower power’ at the height of the Vietnam War was taken by French photographer Marc Riboud.

In 2014, the world has changed, and the photo quickly becoming a symbol of peace in the Middle East is actually a selfie:

He calls me neshama, I call him habibi. Love doesn't speak the language of occupation #JewsAndArabsRefuseToBeEnemies pic.twitter.com/CpqwxNM6ys

Taken by Arab-American journalist Sulome Anderson and her Israeli-American boyfriend, the selfie shows them kissing while Anderson holds up a sign that says “Jews and Arabs Refuse To Be Enemies.”

That rallying cry has since become a viral hashtag that adorns thousands of tweets and retweets, all calling for peace. In a NY Mag essay about the photograph, Anderson says they “posted the picture without a second thought” to support a then little-known Facebook page.

Ten days later, the response, she writes, “is scary and overwhelming. But we both know that afraid is the wrong way to feel about it.” To read her full essay, head over to NY Mag by clicking here.