When it comes to testing, Lowepro gear doesn’t have it easy. Earlier this year, Lowepro announced a new lineup of camera bags aimed at the traveling professional, and yesterday, they released a hard-to-watch video in which these bags are put to the test.

Called the X-series, these roller bags are meant to withstand almost anything a brutal baggage handler or terrible trek can toss their way.

To prove this, Lowepro strapped a bottle of bubbly into the center compartment of one of these X-series tanks and promptly did everything they could short of running over it with a vehicle to show how safe your gear is inside. 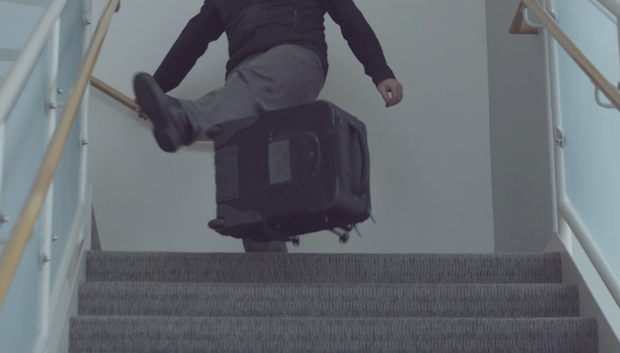 Dragged, tossed, kicked and thrown off the back of a truck, down some stairs, and off an admittedly small bridge, the bag took its beating without cracking the champagne bottle inside.

And while, we grant you, a bottle of bubbly is not a sophisticated piece of electronic equipment, the brutality the bag went through while still keeping the champagne and its accompanying flutes unbroken is impressive nonetheless. Press play to see for yourself, but be warned, this video is unsuitable for those of you who baby your camera bags.