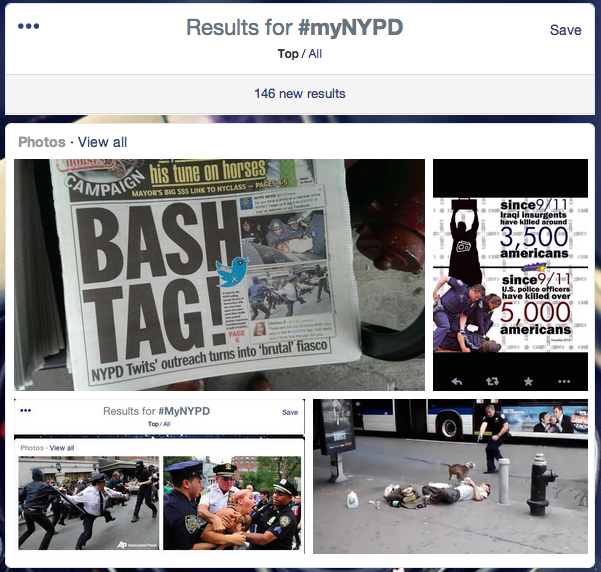 The NYPD should probably have stopped to think a second before they launched their #myNYPD photo contest on Twitter. Alas, they did not, and what transpired because of this lack of foresight is part social media frenzy and part PR fiasco.

Launched yesterday, the #myNYPD Twitter campaign was meant as a way for people to share happy photos of them with police officers. If they were good enough, the pics might even make it up on the department’s Facebook page. Everybody wins: Except not everybody wins, and when it comes to police interaction, it’s not always positive. In fact, I’m struggling to think of a time that someone I know started a story with “I had a run in with the cops yesterday” and ended it with “and then we took a great group shot!”

The majority of the photos that have been posted to this hashtag have been of a negative nature. Some are funny, some are violent, some are tragic, but few are accomplishing what the NYPD set out to do with this campaign. Instead, we have healines like “Bash Tag:”

Here are a few of the other images that have gone up under the hashtag (you can see them all at this link):

Oh, and the movement is still picking up steam. Since I began writing this article (and I’m not a slow typer) 146 new tweets hashtagged #myNYPD have gone up… I’ll let you take a look for yourself to see if any of them would qualify as “good PR.”

The Story Behind the Late Photojournalist Chris Hondros’ Most Poignant Image