With only a 12-megapixel sensor and ISO expandable all the way up to 409,600 for both stills and video, everybody knew that that the Sony A7s was going to be a low-light beast… and yet the performance is still taking us by surprise.

Yesterday a short demo video shot at NAB was shared online to a plethora of “oohs” and “aahs,” and today, the Sony How To YouTube channel released yet another mind-blowing demonstration of the camera’s night-vision capabilities. 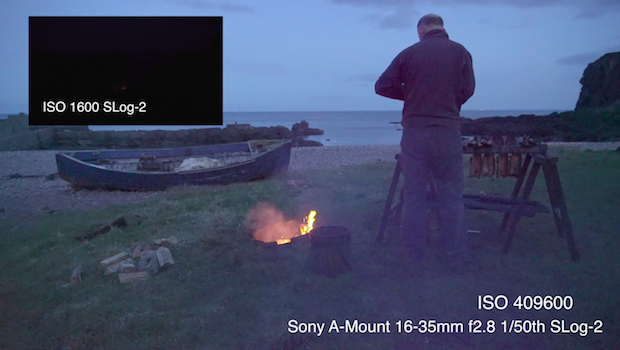 Just like yesterday’s comparison, there is some serious noise there at ISO 409,600. So much that you wouldn’t use this for production work. But it is unbelievably clean considering this is ISO 409,600 coming out of a mirrorless full-frame camera. What started out as the hint of a campfire turns into fully-visible dawn.

The only question left is: how much will Sony charge for this kind of low-light prowess? Because UK retailer Wex Photographic claims Sony UK told them the body-only price will be £2,500, which translates into roughly $4,183 USD… over twice as much as the regular A7 costs WITH the kit lens.