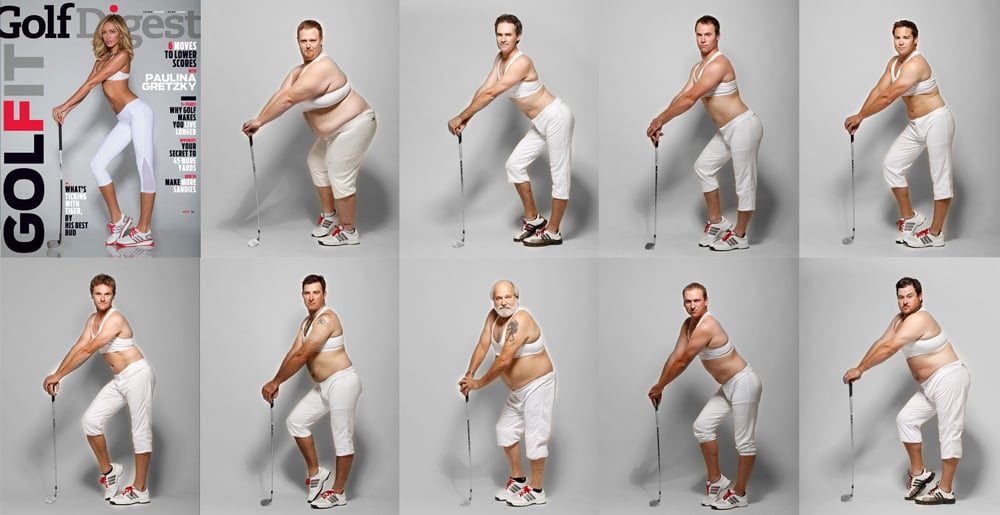 If you’re into Golf, you might have heard about this controversy over the most recent cover of Golf Digest. Apparently, the magazine erred when it decided to put Paulina Gretzky (daughter of famed hockey player Wayne Gretzky and fiancé of pro golfer Dustin Johnson) on the cover instead of an actual… you know… golfer.

But rather than get caught up in all that, Orlando-based photographer Cy Cyr decided to spoof the cover instead.

The original cover was shot by legendary photographer Walter Iooss, who is Cyr’s photographic idol and part of the reason he decided to take this on. And so, one fateful day, he invited some of his most cooperative friends over for what had to be a pretty fun photo shoot.

Here’s a behind the scenes video that shows Cyr working on both his professional work, and this particular spoof. You can also click here to see a higher res version of the main photo:

Of course, what started as a fun joke and tribute to one of his favorite photographers has turned into something of a viral hit… at least in the sports world. The photo ended up on the TODAY show and was picked up by everyone from the NY Daily News to NBC News to The Daily Mail.

We’re just not sure who we’re more impressed with: Cyr for thinking of and going through with this idea, or all of his friends who were willing to join him and pose in sports bras and white capris.

For more info, videos and links to the veritable cornucopia of sites that have covered this fun photo spoof, head over Cyr’s blog post on the topic by clicking here.

Image credits: Photograph by Cy Cyr and used with permission