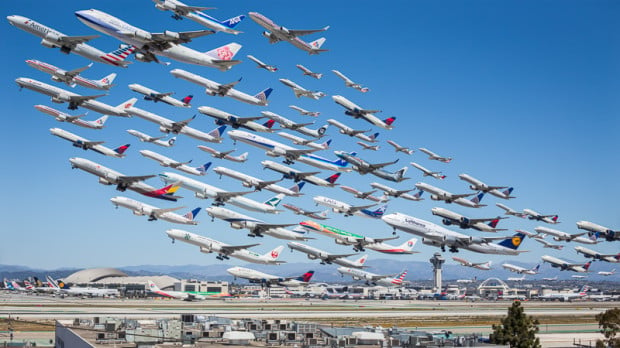 Now this is a composition. Spending an entire day just outside of LAX and another “eight or so hours” in Photoshop, photographer Mike Kelley put together a photo he’s calling “Wake Turbulence” — a composite that documents an entire day of departures from LAX.

Bearing resemblance to Cy Juckenbaker’s composited time-lapse of departures from San Diego International Airport, both photographers were inspired by the same photo: this image by photographer Ho-Yeol Ryu. Kelley’s still composite, like Ryu’s, manages to perfectly frame dozens of airplanes just getting into flight.

He describes the process of capturing the source material on his blog:

In order to capture the shot, I set up a tripod and photographed every single plane that flew across my frame anywhere from 3 to 10 times. Using sandbags to ensure that the camera didn’t move and coming as close to peeing myself as I ever have in my 26 years of existence from not wanting to leave my camera unattended, this resulted in over 400 images from which the composition is built, but not all of them were used.

Here are a couple of un-edited frames: 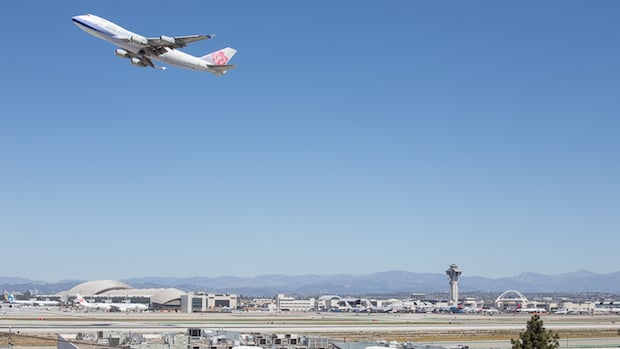 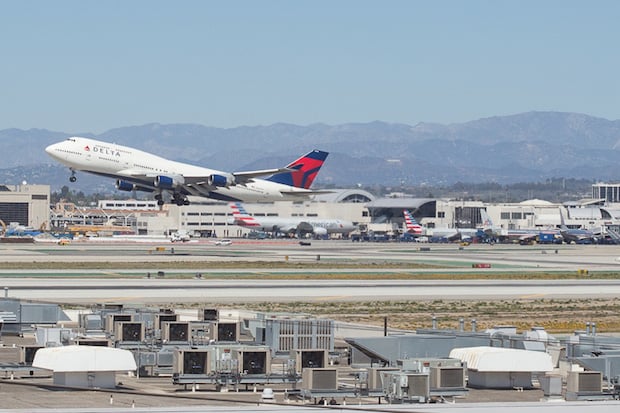 Kelley goes on to say that he “took some artistic liberty with the angles of attack to make a more interesting photograph,” but that, for the most part, “this is all very similar to how it would appear if you were to go and watch yourself.”

For those of you who would like prints, Kelley has put some up for sale. Coming in at $400 for an 18″x36″ and going up in price with size, they’ve been called a bit pricey, but they are printed on Hahnemuhle archival quality fine arts paper, after all.

The amount of time and dedication it takes to capture and create composites like this is always a little mind-blowing. He’s reached out to LAX to see if they’re interested in using the image, but he’s yet to hear back from them. Fingers crossed he does and we’ll be able to see a massive print of this beauty the next time we make it to LA.

About the photographer: Michael Kelley is an architectural and fine art photographed based in Los Angeles, CA. His work can be seen at www.mpkelley.com and prints of the shot ‘Wake Turbulence’ can be purchased at www.purephoto.com/MikeKelley.

Image credits: Photographs by Mike Kelley and used with permission