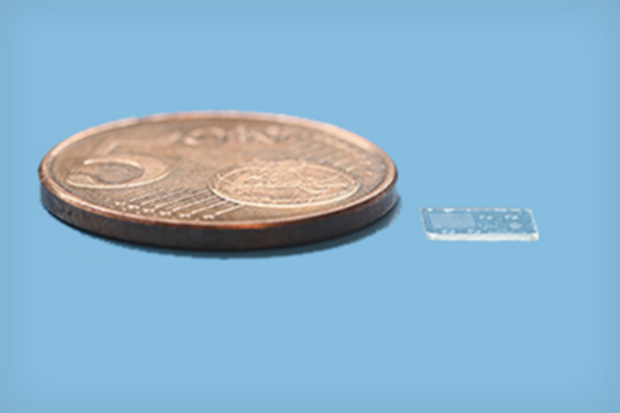 This latest device from technology licensing company Rambus goes to show: when you combine information-gathering sensors with powerful algorithms, you can yield some incredible results.

Developed by research scientist Patrick Gill, this 200 micron diameter glass sensor is capable of capturing an image of remarkable quality for its size. Etched with a spiral pattern, the light reflecting off of whatever object is being “photographed” is transferred as a pattern, in the form of spherical light, to the CMOS sensor.

And while the visualization of the resulting image looks like nothing more than a heavily vignetted piece of paper to our eyes, as the example of John Lennon below goes to show, the information can then be translated with the help of an algorithm to create a resulting image our brains can actually make use of.

Unfortunately, as is expected with such a new piece of technology, the results are still greatly limited. The current model is capable of capturing 128 by 128 pixel images, and while that’s a step up from the original prototype (which shot at a whopping 20 by 20 pixels) it’s nowhere near the quality consumers demand.

But that’s okay, because it’s not Gill’s goal to replace any current camera technology. Rather, he’d like to compliment it and change how we think of capturing an image. As he explained to The Verge, “we shift the burden of image formation from a purely optical task to a joint optical and computational task.”

This could effectively lead to much smaller, cheaper and more easily produced sensors that could turn just about any device into a low-res camera capable of recording images, video or just motion if gesture control is your end game.

Right now, it’s just a proof of concept device, but it’s a big step in the direction of Gill’s dream: “to add eyes to any digital device, no matter how small.”

Memory Cards vs Kalashnikovs: On Trying to Cover the News in Crimea Right Now