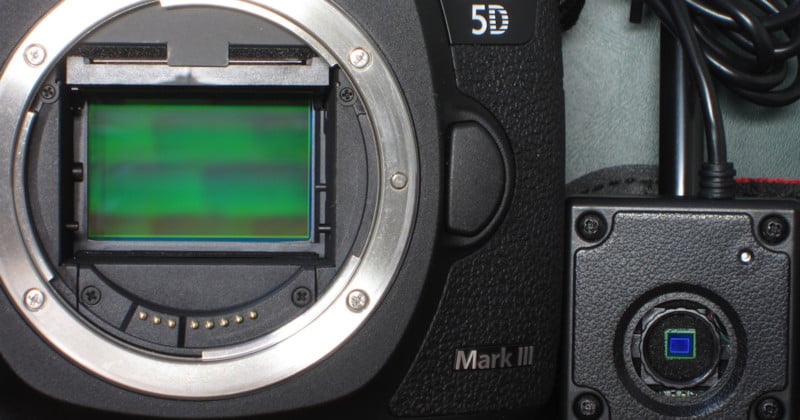 No glass? No problem! At least that’s Hitachi’s goal. The Japanese company has announced development of a lensless camera that uses moire fringing and math instead of a lens to capture images. What’s more, those images can be focused after you take the shot.

Lensless/flat cameras are not a new idea—a FlatCam is being developed at Rice University as I type this—but Hitachi’s version is unique. For one thing, this camera can be focused after the fact; for another, the company is planning to commercialize this tech as early as 2018.

So, how does this lens-less camera work? Like this:

The secret is a “film imprinted with a concentric-circle pattern” that is laid directly on top of the image sensor. The pattern casts a shadow onto the sensor during image capture, which is then compared to a second, similar pattern that is superimposed onto the image during processing.

The difference between those two creates Moiré fringes that can be analyzed to determine the incident angle of light. From there, the camera uses math, specifically a Fourier transform (this has been done before), to capture a final image.

If its sounds complicated, that’s probably because it is. But it’s also potentially revolutionary.

The Hitachi camera’s design is special because it does double duty. Not only can it capture images without using a bulky lens, it can also capture depth information and focus that image after the fact.

Essentially, it’s just capturing the angle and pattern of the light coming into the sensor, so you can change what’s in focus after the fact by superimposing a different pattern on top of the captured shadow during processing.

For now, the tech is still being developed, but potential uses named range from robots, to self-driving cars, to smartphone cameras. Hitachi will be presenting their work at the International Workshop on Image Sensors and Imaging Systems in Tokyo this week. To learn more about this exciting tech, check out the official press release by clicking here.

(via The Indian Express)

Otherness and the Fetishization of Subject

Photographer Shows the Supermoon’s Relative Size in the Sky