To the world of lens mount adapters comes a new creation by Adaptist. Called the Pentax K+ Multi-Mount, this adapter takes a unique approach to the mounting system allowing you to attach Nikon F-mount, Olympus OM-mount, Contax/Yashica C/Y-mount and Konica AR-mount lenses (in addition to the standard K-mount, of course) to your Pentax DSLR, all within this one integrated solution.

It works in two ways. First, rather than placing this overtop of your Pentax DSLR’s mounting bracket, you replace it entirely with the PK+MM (using a standard 2mm Phillips head screwdriver). Doing this allows for the correct focal distance to be achieved across all lens types, something often inhibited by the “screw over” type of adapters. Plus, since there’s no need for additional glass in this mount, there isn’t any decrease in image quality.

The second way in which it works its magic is through the unique approach they’ve taken to creating a more universal bayonet mount. I’ll let the crew over at Adaptist explain this one:

Most bayonet mounts have 3 metal tabs and the differences between different mounts lies in the mount diameter, position, thickness, shape and size of these tabs. Measurements and trials were used to determine the best design to accommodate the different mounts.

Made of brass and chrome-plated, it’s manufactured in the same way as the original part, ensuring it can take a lifetime of attaching and removing various lenses. 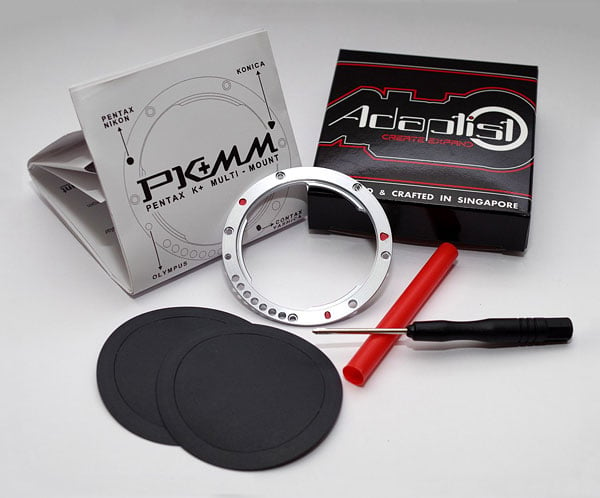 It doesn’t come without some caveats though. Most notably: the multi-mount can only be used with a select few Pentax camera bodies, leaving all of the weather-resistant DSLRs out of the equation due to different ring mount sizes and lack of the O-ring used for sealing.

Also a bit inhibiting are a few brand-specific issues. For example, Nikon F mount lenses need shims to properly fit the mount (but the shims are provided with the adapter, so that’s not a huge drawback) and you actually have to shorten the Contax/Yashica aperture lever (non-reversible…) by 3+mm so that you can stop the aperture down.

Beyond that, other more typical pitfalls apply: such as manual focus, loss of aperture control and the lack of a proper lens release catch.

Priced at $77 plus $4 shipping and handling, the multi-mount doesn’t come in cheap. Add that to the fairly niche market it’s directed towards, and some of the excitement is taken out. But, as with all progress, it’s a step in the right direction and it’ll be interesting to see if other companies come up with equivalents for Nikon, Sony and Canon cameras.

To see a full list of Pentax DSLRs it can be mounted to, in addition to more information on the system itself, you can head on over to the company’s product page by clicking here.