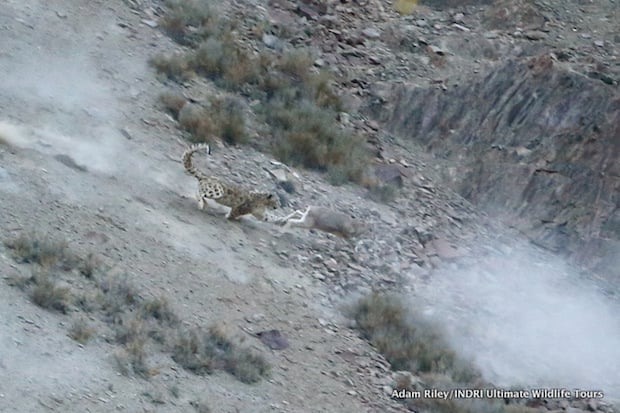 When it comes to wildlife photography, the Snow Leopard is almost unicorn-like. No, it’s not mythical, but it’s almost as hard to capture one of these infamous “gray ghosts of the Himalayas” on camera as it is to track down a creature that doesn’t actually exist.

Imagine, then, how amazed the people on a recent INDRI Ultimate Wildlife Tour were when they got to watch AND photograph a Snow Leopard making a successful kill — a world’s first.

The tour group actually caught their first sighting on the third day of a tour in a high elevation area of Hemis National Park (which is located in Jammu-Kashmir State, north west India), and only thirty minutes into the ‘hunt.’ The cat was over one and a half miles away, but for 90 minutes they got to watch the magnificent beast as is sunned, rolled around in the gravel like a tabby cat and even made an unsuccessful hunting attempt.

That alone would have made the experience well worth it, and high-fives were graciously given and received, but they all dreamed of a closer sighting.

Two days later, after a full day of unsuccessfully scanning the horizon for any sign of the 11 predators that camera traps in the vicinity had caught sight of recently, the group had their wish fulfilled in spades.

A beautiful specimen, fur glistening almost golden in the morning light, appeared much closer to where they were camped out, rolled around in the gravel (apparently this is how they cover up their scent when they hunt), and stalked away on the hunt.

Minds buzzing with excitement, the group quickly grabbed their gear, made for a closer vantage point and settled in once they spotted their subject once more. A few minutes later, Riley captured this photo as the Snow Leopard gathered enough courage to look right at them:

Several hour later, as the shadows began to lengthen, their good luck got even better. Here’s how Riley describes the experience:

A herd of ten Blue Sheep made an appearance on the scene. They slowed grazed their way up from the stream cutting through the valley, heading in the general direction of the rocky outcrop in which our Snow Leopard was resting…

After another quarter of an hour [three of the sheep] started grazing again… making their way to the lusher grasses growing along the base of the outcrop in which our Snow Leopard was still snoozing. Suddenly the Snow Leopard detected the presence of its prey and sat up on its haunches for the first time since we had relocated it.

It began to bob its head from side to side, a clear feline sign of measuring distance and perspective in planning an attack. We could not believe our fortune, could we really be treated to a Snow Leopard hunt – this was beyond our wildest dreams?

The answer to that question, as you might have guessed, is ‘yes.’ The gray ghost began making its way towards its prey, disappearing and reappearing closer and closer until, ‘in a blur’, everything happened. The rest of the story, we’ll tell in pictures: 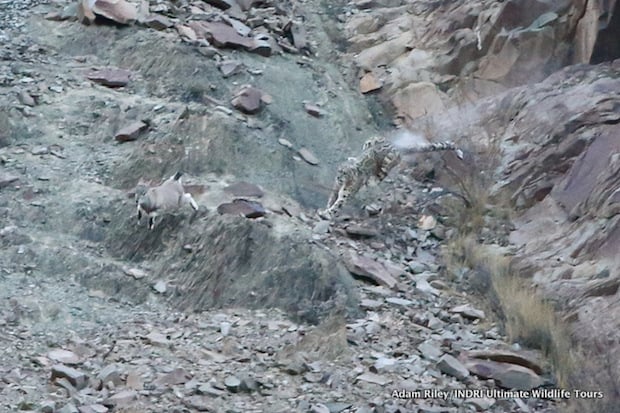 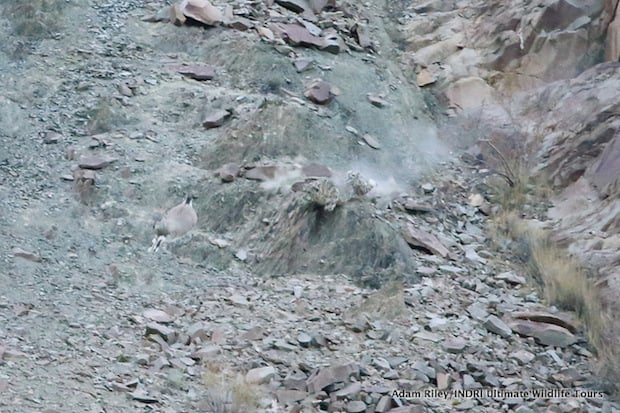 Given how incredibly difficult it is to even catch sight of these creatures, the images you see above are spectacularly rare. Camera trap photos aside, few humans ever see this creature in its natural habitat, even fewer have ever seen one hunt, and above are the ONLY images ever captured of a successful kill from start to finish.

We don’t know about you, but the photos gave us goosebumps. In particular the perfectly timed shot of the Snow Leopard reaching out a paw and ankle tapping the sheep, spelling the beginning of the end in an incredibly swift instinctual movement.

Riley recounts the entire story in more detail on the INDRI Ultimate Wildlife Tours blog, which we highly suggest you go and visit so that you can ogle at more images and start planning your own trip.

The Image Story: A Website that Dives Into the Story Behind Incredible Photographs

Photojojo Shows You How to Make a Cool DIY Pocket Portfolio