There are many videos and articles out there condemning the use of Photoshop to alter a model’s body in unnatural ways. The practice is abhorred by most, and hardly a week goes by that another “Photoshop fail” or controversy doesn’t arise (this week’s featured photos of actress Lena Dunham taken by iconic portrait photographer Annie Leibovitz).

The most recent anti-Photoshop video making the rounds online, however, is a bit different. It’s a music video that shows the lead singer being given a digital makeover as she sings the song.

The music video was created by directors Nándor Lőrincz and Bálint Nagy for Hungarian singer Boggie. In three minutes, Boggie is transformed from a normal, no-makeup-on, beautiful woman into a glowing Barbie-like version with lighter skin, different hair, different colored eyes, and so on.

Here’s the before and after from the video: 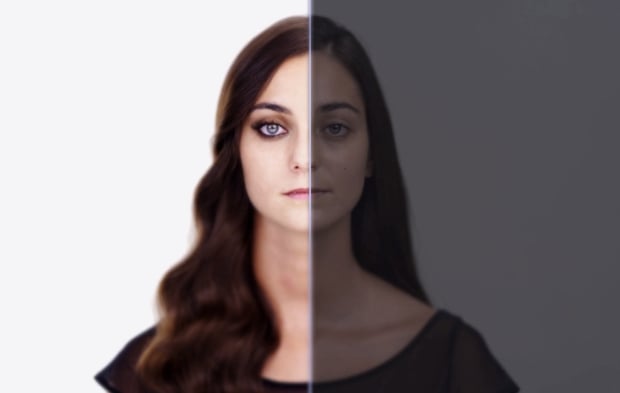 Of course, anybody familiar with Photoshop will realize that this isn’t being done live as is being shown in the video. It’s also obvious that a good bit of the improvement between the before and after can be attributed to hair, makeup and lighting.

But the message is clear nonetheless: don’t believe everything you see. Perfectly symmetrical eyes that shine extra bright, flawless skin that somehow survives without the benefit of pores and perfect makeup (applied either in post or by professional artists), while commonplace in magazines, are not commonplace in real life.

Let us know what you think of the video in the comments down below. Do you think it’s important that this message continue to be shared with the masses? Or are you getting a bit tired of the many viral anti-Photoshop/retouching campaigns that have sprung up recently?