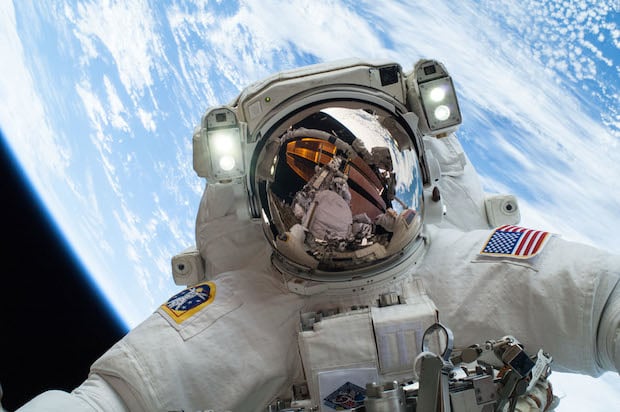 Well, if you’re gonna put a portrait of your mug on Instagram for the whole world to see, this is the way to do it. Taken from outside the ISS during one of the two spacewalks required to replace a faulty water pump, this selfie-like portrait (it is NOT a selfie, contrary to just about every headline you’ll read) was uploaded to NASA’s Instagram account yesterday.

First, the facts: This is not a selfie. I emphasize this because, even though the full-res version clearly shows another astronaut holding the camera, many a publication ignored this fact… perhaps because astronaut selfie sounds better in a headline than astronaut portrait.

The portrait is of NASA astronaut and Expedition 38 Flight Engineer Mike Hopkins who, along with Rick Mastracchio (seen in Hopkins visor reflection holding the camera), ventured out into the abyss twice to fix a water pump that failed causing some overheating issues. The photo was taken during the second spacewalk, which happened on Christmas Eve.

Here’s the Instagram embed of the photo, which has earned itself over 45K likes in the last 24 hours:

Stunning Photos of the European Alps that Inspire Awe and Envy