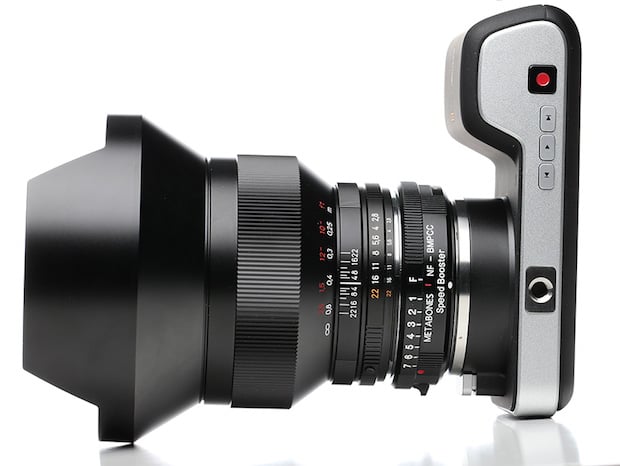 Metabones, maker of the impressive Speedbooster adapters is back at it again. When the Speedbooster first came out, I wrote about it being like magic, increasing the aperture and field-of-view of Nikon and Canon full-frame lenses mounted to NEX and micro 4/3 cameras, while maintaining or even improving image quality. Now they’ve brought the Metabones magic to the Blackmagic cinema and pocket cinema cameras.

The original Metabones Speedboosters are available in several versions adapting various full-frame lenses to NEX, micro 4/3, and Fuji-X cameras. They offer a magnification factor of 0.71X; meaning the lens focal length changes by this factor and the aperture increases by one stop. For example, a 100mm f/2.8 full-frame lens becomes a 71mm f/2.0 lens when mounted on an NEX camera by a Speedbooster.

For people shooting video on micro 4/3 and APS-C size sensors, the Speedboosters give them an opportunity to shoot with full-frame lenses and reduce the ‘crop factor’ associated with shooting on the smaller sensor size. The also increase the aperture of the lens, letting in more light.

Dr. J. Brian Caldwell (the Speedbooster’s designer) and the folks at Metabones got excited over the possibilities that Blackmagic cameras presented in two ways. First, because the Blackmagic cameras are less than 4/3 sensor size, people shooting with these cameras are always looking for lenses with a wider field-of-view and aperture, a perfect situation for a Speedbooster. Blackmagic shooters are already using m4/3 mount Speedboosters on their cameras regularly.

The other exciting possibility came about because Blackmagic cameras have a bit more wiggle room than micro 4/3 and NEX cameras; the sensor is a bit further back from the mounting flange. This meant they could design a larger Speedbooster with 6 elements and a bit more spacing, rather than the 4 elements in the original Speedbooster.

I was able to talk with Brian about the opportunities this provided and was given two prototypes to use for some preliminary testing here at Lensrentals.

First, a quick look at the new Speedboosters designed just for Blackmagic cameras. From the front, they look just like the previous Speedboosters:

From the side, the Speedboosters designed for Blackmagic cameras are obviously a bit thicker than the original Speedbooster …

… and that extra space is obviously being put to optical use:

First, let’s be totally clear. These work only with Blackmagic micro 4/3 mount cameras. I know there are people out there who can’t wait to put these on their standard micro 4/3 cameras. If you try it you’ll crunch the back of the Speedbooster and the camera’s sensor (think of the resulting financial loss as a tax on stupidity).

Both adapters take Nikon “G” lenses and have Metabone’s manual G aperture control, allowing you to set the lens aperture manually from a ring on the Speedbooster. The manual aperture ring is smooth – no ‘clicks’ when turning it — and provides linear control over aperture size. Both Dx and Fx lenses can be used, as well as third party lenses in F mount (including those with fixed hoods).

The Metabones NF-BMCC Speedbooster can be used on either the Blackmagic 2.5k Cinema camera or on the Blackmagic Pocket Cinema camera. It has a 0.64X magnification factor, so it gives you roughly a 10% increase in field of view compared to the previous Speedboosters. In addition, aperture is increased by 1.33 stops, so an f/1.2 lens will give an output aperture of f/0.8 when mounted to the NF-BMCC Speedbooster. A Nikon 50mm f/1.2 lens, for example, becomes the equivalent of a 32mm f/0.8.

The NF-BMPCC Speedbooster (notice the P for Pocket) is only for use on the Blackmagic Pocket Cinema camera. It provides a magnification factor of 0.58X and allows a maximum aperture of f/0.74. That same 50mm f/1.2 lens with the BMPCC Speedbooster becomes the equivalent of a 29mm f/0.74 lens. That should get your attention a bit.

Just in case someone is missing it, this does not make the lens look like a 29mm f/0.74 lens would look on a full-frame camera. The Blackmagic crop factors of roughly 2.4 for the Cinema and 3.0 for the Pocket camera have to be taken into account. (Please let’s not have 631-comment argument about the exact crop factor of these cameras, whether Blackmagic’s specs are correct or incorrect, etc. – if the difference between a 2.88 and a 3.02 crop is critical to you, then decide which way you want to figure it out.)

So How Did They Do That?

When I first read about the original Speedboosters almost a year ago I was pretty cynical. I knew you didn’t put glass between your glass and the camera and make things better. I wasn’t even interested in trying them out until I learned that Brian Caldwell, who designed the Coastal Optics 50mm Macro and other amazing lenses, designed them. When I did actually test them, I found that their claims were really correct; they did magically increase field-of-view, effective aperture, and even optical quality in some ways.

It’s not completely magic, of course. In simplest terms, where a teleconverter magnifies the aberrations in a lens, the Speedbooster actually does the opposite, minimizing those aberrations, particularly vignetting. Depending on the lens and camera there is going to be some variation, of course. There might be a bit more astigmatism on this lens, or some aberration on another lens. Like any adapter, there may be some field tilt so one side of the image may be a bit softer than the other. But in general, acutance and resolution are at least as good with the adapter as without it and vignetting is improved.

When I received MTF data from Metabones for the new Blackmagic Speedboosters, though, I was a bit surprised. They make some bold claims for MTF improvement with an adapter. But having experienced how accurate their claims were with the original Speedboosters, this time I won’t discount them.

As luck would have it, Brian was driving through Memphis a couple of weeks ago and I shamelessly bribed him with Barbecue and fudge pie in order to get some information and a couple of prototype copies to test. The bottom line is the extra space in the Blackmagic design gave Brian the opportunity every lens designer wants – it eliminated constraints and gave him extra freedom to tweak his optical design. In this case the spacing and ability to use 6 elements instead of 4 made a big difference. As Brian said:

The 6 element design allowed us to improve the optical correction while simultaneously increasing the aperture. The extra elements don’t reduce the transmission efficiency because they were added by compounding two elements into cemented doublets, which have virtually zero reflection losses at the cemented interface.

This, coupled with the fact that the design is optimized for an 18.2mm diameter image circle, means that this new Speed Booster is incredibly sharp even at very large apertures. The reason we chose the 0.64x magnification is twofold: 1) it effectively converts the 2.5k camera to Super-35 format (28.4mm x 0.64 = 18.2mm); and 2) it is still completely compatible with DX format optics such as the new Sigma 18-35/1.8 with no potential vignetting issues.

One other thing Brian discussed in some exceedingly geeky detail I’ll summarize here: The 6 element design makes the new Speedbooster less sensitive to position of the lens aperture and reduces the amount of ‘sombrero’ MTF curvature (where the MTF is very good in the center, drops just off-center, picks up again, then drops off in the corners). Together this should help give more consistent performance with different lenses.

A Quick Look at Things

I had the chance to try out the new Speedboosters around the shop for a week and they certainly do give some awesome new options to Blackmagic shooters. Now if Metabones was Canon and I was Vincent LaForet (or if I just had talent), we’d be showing you some moody dark footage from a rainy night in Paris or something. Heck, if I was the guy from Digital Rev I’d at least have comparison shots of some girl in a bikini.

But things being what they are, you get some fascinating shots of a workbench taken with a Black Magic Pocket camera with 3 different lenses: the Panasonic 14mm f/2.5, Olympus 12mm f/2, and Zeiss 15mm f/2.8 mounted to the BMPCC Speedbooster. I’m not entirely without creative abilities, though. Notice how you can tell which lens I’m shooting with by the subtle and mysterious way the other two lenses show up in the picture. 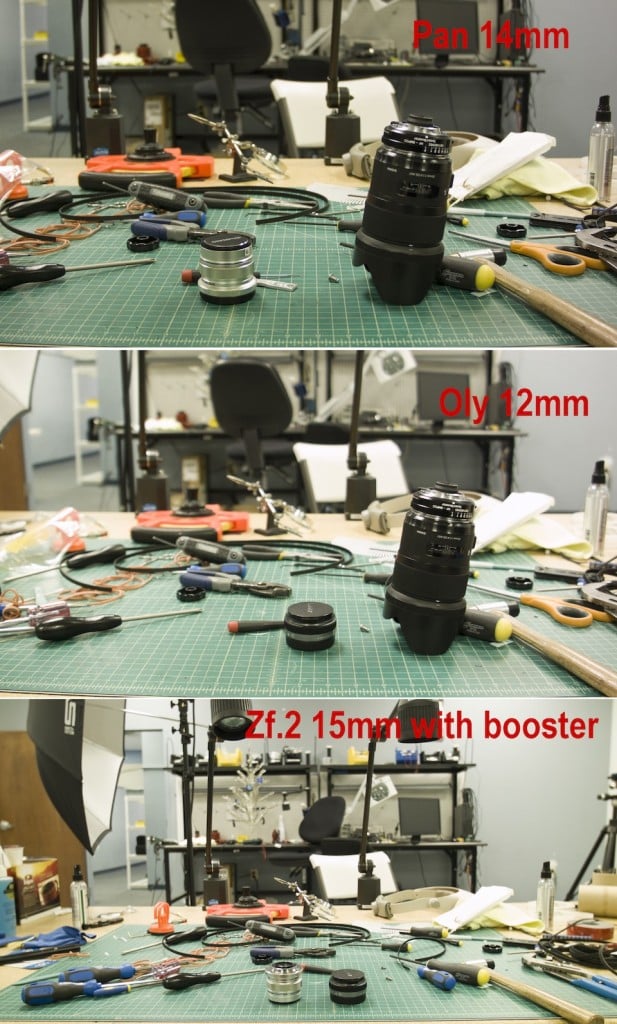 What’s not subtle and mysterious is just how wide that last image is compared to the other two. The Zeiss 15mm f/2.8 is effectively now an 8.9mm f/1.6 lens. If you want to look at it another way, here are images taken with the Zeiss 15mm mounted to the camera via an adapter, and mounted with the Speedbooster.

And while the Blackmagic Pocket Camera doesn’t give us photo-quality resolution, it’s still worth showing how nicely the image holds up from corner-to-corner at 100%.

I have the bad habit of letting my mouth write checks my butt can’t cash. In this case, I said “no problem” when asked if I wanted to optically test these adapters. Our testing lab, unfortunately, just isn’t up to doing a lot in this case.
Because of setup, sensor configuration, and resolution, Imatest proved impossible to use. These adapters can’t be mounted to our usual micro 4/3 test cameras and the Pocket camera is impossible to set up for Imatest. In theory, the 2.5 Cinema cam could be used for Imatest, but in practice the alignment process using video DNG files proved so difficult that I didn’t trust the results. (Not to mention the low resolution of even the video raw files make the results so compressed as to be meaningless, too.)

The optical bench was nearly as limited. On the optical bench various motors move the light projector across the field of view and to multiple focus distances automatically. While it can handle micro 4/3 mount lenses, the addition of the Speedbooster made the automated settings useless. We reset things manually, but this brought the reticle (the microscopic grid projected to determine the MTF) so close to the lens that off-axis focusing was outside the automated limits.

Off axis the situation is reversed, with the Speedboosted lens showing slightly higher MTF readings at the higher frequencies. Whether this is because the Speedbooster does improve off axis MTF, though, I can’t say with certainty because we’re not testing as far toward the corner with that setup. But Metabones computer generated MTF data suggests that it does, and nothing I see would argue that point.

All of this is pretty much Geek hair-splitting, though. In real-world terminology, the differences we’re talking about here might, or might not, be visible when using an extremely high-resolution camera like a Nikon D800 SLR.

Shooting video, even 4K video, these tiny differences are just not going to be visible. For all practical purposes shooting a lens mounted to a Speedbooster will give you identical resolution that you would get without the adapter. But you definitely do get that much wider field of view and aperture.