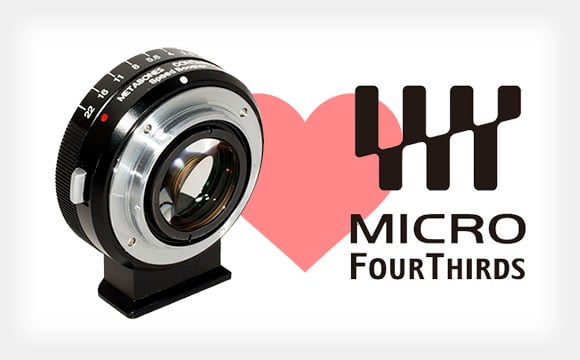 Back in January 2013, lens adapter company Metabones rocked the camera world by announcing the Speed Booster, an SLR-to-mirrorless lens adapter that can magically increase your maximum aperture, sharpness, and angle of view.

So far the adapter has been released for Sony NEX and Fuji X cameras, but greater things are on the horizon: Metabones will be releasing the Speed Booster for Micro Four Thirds cameras as well. 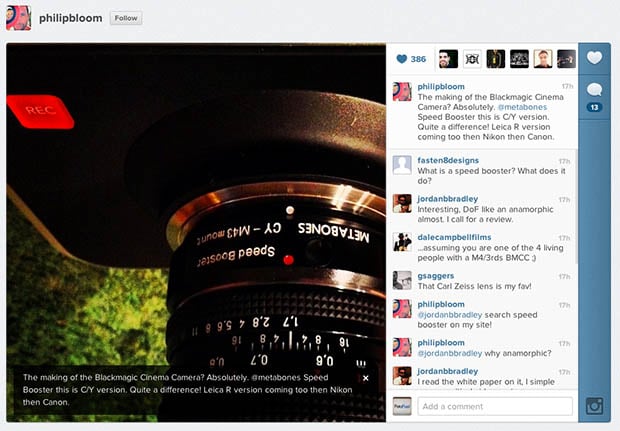 As you can see from the screenshot above, filmmaker Philip Bloom already got his hands on a Speed Booster, which he’s using on a Blackmagic Cinema Camera (the camera has a MFT mount). In the description of the Instagram photo, Bloom writes,

The making of the Blackmagic Cinema Camera? Absolutely. @metabones Speed Booster this is C/Y version. Quite a difference! Leica R version coming too then Nikon then Canon.

Andrew Reid of EOSHD, another person lucky enough to get his hands on a pre-release unit, writes that he believes, “Micro Four Thirds needs the Speed Booster more than any other camera.”

So soon you’ll be able to use Contax/Yashica, Leica, Canon, and Nikon lenses on your Micro Four Thirds camera, and take advantage of benefits that standard adapters can’t offer.

Your lens’ light will be refocused onto the smaller sensor, increasing your maximum aperture by 1 stop, increasing the MTF (i.e. sharpness), and making your lens wider by a factor of 0.71x. The resulting crop factor will be roughly 1.4x, or what you’d get by attaching a full frame lens to a APS-C camera.

If you already have a sweet collection of lenses for your SLRs, you’ll be able to use them on your MFT camera without a major crop factor interfering with your work. For example, a 21mm f/2.8 lens would look like a 42mm when mounted to a Micro Four Thirds camera using a standard adapter.

The Micro Four Thirds Speed Booster was originally set to arrive in April 2013, but Metabones recently announced that the launch has been pushed back to the second half of 2013.

P.S. This video uploaded to YouTube also suggests that the Speed Booster will be arriving for Canon’s EOS M mirrorless camera as well: