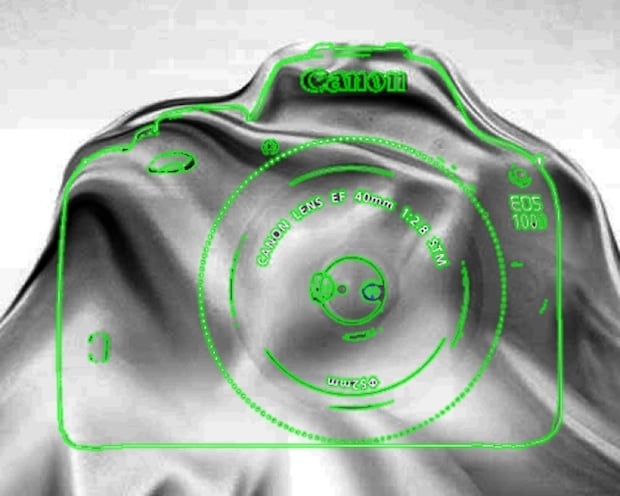 At the end of last week, Canon Korea teased a new camera in an ad that showed what seemed to be a DSLR hidden behind a semi-see through sheet. Now, adding fuel to the fire (albeit a small fire) that the Korean branch of the company started, Canon Japan has released a teaser video (embedded below) about the same camera.

As teasers go, this one is a bit on the sad side. No deep message, no man in the Scottish highlands on a “journey of self-discovery,” just a pair of white lips wishing you a Merry Christmas. The title, however, does give something away.

The Canon Rebel DSLRs are known as the Kiss lineup in Japan, and so the video confirms this will be a new consumer-level DSLR (no $3,000 retro shooter from Canon… yet). The two main theories here seem to be either a followup to the SL1 or simply a white version of the first camera, and if you look at the photo at the top you’ll understand why.

Put together by dicahub, that image shows how the camera under the sheet in the original teaser perfectly fits the SL1’s outline, with a few minor exceptions. Those exceptions could be the result of shooting angle, or hint at the fact that this is indeed a followup with some minor aesthetic tweaks.

For their part, Canon Watch seems to think that this will be a white version of one of the Rebel cameras currently in production, while Canon Rumors isn’t even sure the product will get a global release.

What’s your take? And if this is just a white version of one of Canon’s current cameras, will this just add to growing dissatisfaction among many consumers who claim the big two aren’t innovating? Let us know what you think in the comments down below.

To Infinity and Beyond: Photos and Video of the Olympic Torch’s First Spacewalk