It might not be quite a trend yet, but associating sound with photos isn’t new either. Whether we’re talking about interesting photographs created with sound (like Martin Klimas’ paint photos) or about a camera that captures both sound and light, the idea of pairing sight and sound in photography has come up before.

Mhoto is a company with an idea along those same lines, only instead of capturing the sounds happening at the moment you take a photo, the company’s tech creates music based on a photo.

The program is still in beta, but the idea is sound … if you’ll allow us a small pun. The patent pending technology works by first having you associate colors with moods. You then feed it a photograph, select the primary color, and Mhoto analyzes the saturation, brightness and contrast levels to create a customized tune for that particular pic.

In the future, they’re planning to add in facial recognition, so that the program can better analyze the mood of a photo and create a track to match. 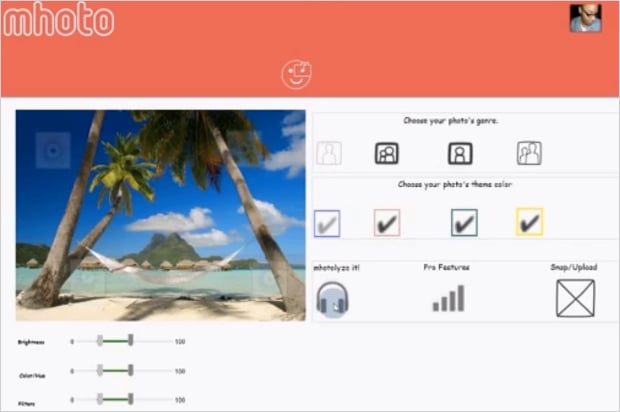 The resulting song can then be customized or remixed by either changing the genre or primary color you selected, or editing the photo parameters (e.g. brightness, contrast, etc.) themselves. And since the company has partnered with big-time producer Dub Killer, the tracks that Mhoto spits out should be pretty high-quality.

How the technology will come to be used in the end is anybody’s guess, but it looks like a few big companies have some ideas — Samsung, HTC and China Mobile have all expressed interest in Mhoto. Who knows, before long we might have three types of Instagram posts: photo, video and photo+sound.

Photography is a Sin, According to India’s Leading Islamic Seminary