Earlier this month, photographer Maciej Winiarczyk captured a rare and beautiful celestial light show. While shooting a time-lapse in Caithness, Scotland, he was treated to not one but two stunning natural phenomena when his camera captured noctilucent clouds and the aurora borealis at the same time.

When Winiarczyk set out to shoot the time-lapse on the night of August 4th, he was intent on capturing the meteorological phenomenon known as noctilucent clouds. These clouds, first observed in 1885, are the highest clouds in our atmosphere.

Residing somewhere between 47 and 53 miles high in the mesosphere, they are composed entirely of ice crystals and can only be seen between certain latitudes during twilight when the rest of the atmosphere is already in shadow. 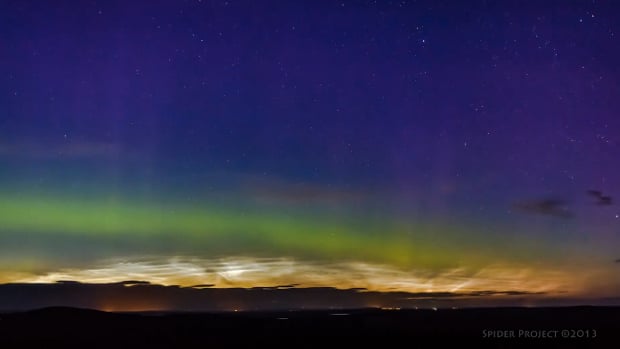 But while capturing NLCs alone would make for a pretty amazing time-lapse, Winiarczyk wound up capturing a special bonus as well. While the NLCs were performing their dance in the mesosphere, they were joined by the aurora borealis (which takes place at about the same height).

Each phenomenon is beautiful (and somewhat rare) by itself. Together, they make for a truly stunning sight.

Watch the embedded video at the top to see what all the fuss is about, and if you’d like to see more of Winiarczyk’s photography, check out his YouTube channel or pay his Flickr photostream a visit.

(via Astronomy Picture of the Day)