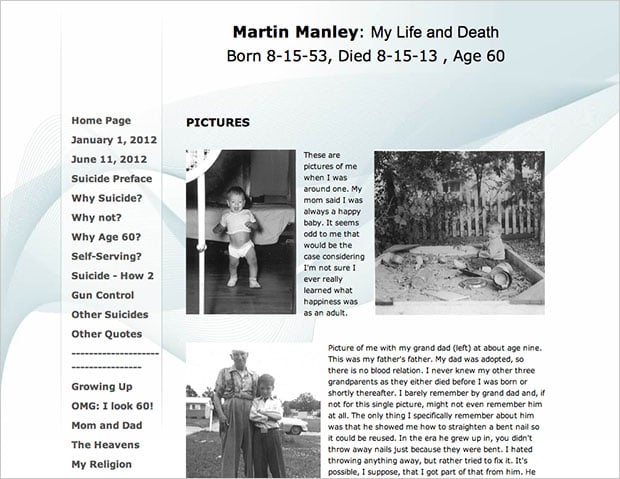 Some sad news has emerged from the Midwest today: The Kansas City Star is reporting that a former employee and blogger committed suicide yesterday outside a local police station. Prior to ending his own life, 60-year-old Martin Manley created his own memorial website that includes detailed information about his life, including photographs captured over the years of himself and his experiences.

The website, titled “Martin Manley Life and Death,” was launched yesterday morning, and begins with this statement:

Today is August 15, 2013. Today is my 60th birthday. Today is the last day of my life. Today, I committed suicide. Today, is the first day this site is active, but it will be here for years to come.

On the left side of the website is a list of pages, most of which are about significant events and moments in Manley’s life. One of the pages is a picture album with glimpses of his childhood and eventual family.

Manley also makes it clear through his website that all the photographs and content contained within have been released into the public domain. “Anyone can do with it whatever they wish,” he writes.

A preface page on the site also makes it clear that the suicide was not due to health, financial, relational, loneliness, or depression issues. So why did Manley take his own life? He says it was to control how he passed away, and to be remembered through a lasting memorial:

Manley writes that he paid for 5 years of hosting the website at Yahoo, and that he’s depending on his family and friends to keep it going after the contract ends. Facebook photographs, on the other hand, could be lost forever after the death of their owners under current laws.

Thanks for sending in the tip, Sam.