British filmmaker Philip Bloom was recently in Frankfurt working with digital agency Szyygy, and while he was there, he was selected as the subject of a filmmaking exercise he assigned the students of the 3-day private workshop he gave.

The assignment was to film a mini doc, and the four students picked Bloom as the subject, choosing to interview him about the street photography he shoots during his time off.

The mini doc offers some interesting insights into what the filmmaker spends his free time doing. Having recently transitioned into shooting film on the street — in order to be “more selective” — Bloom laments that he’s “not doing it right.” Instead of going out with one camera and one lens, he tends to go out with four, five or even six cameras. 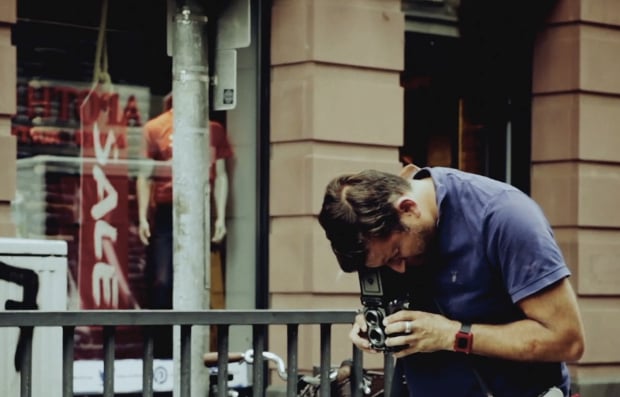 In the video’s description, Bloom confesses that he has finally come to a hard decision and now goes out with only two cameras: typically a Leica M and one of his medium formats. Bloom seems to like the latter in particular, because the fact that each frame costs him some 2 Euros to shoot and develop really forces him to think before he presses the shutter.

How many cameras are too many is up for debate (one commenter maintained there’s “no such thing”) but even with all those cameras, Bloom’s results speak for themselves. Check out the video at the top to see a little bit of his street photography and get an idea of how an award-winning filmmaker spends his free time.