“Don’t forget, Eric: there is a story in your backyard.” This is the advice David Alan Harvey gave me while reviewing my portfolio of travel images during a 2011 Magnum Photos Workshop I attended in Toronto.

About a year after the workshop, having lived abroad and traveled extensively, I returned to my hometown of Baltimore, Maryland to begin my freelance photography career. It was then that I learned the Sparrows Point Steel Mill (a Baltimore hub of industrial activity dating back to 1889) had permanently closed its doors. The news hit home because my parents both hailed from blue-collar communities – my grandfather had worked at Sparrows Point, and my mother, who has lived in Maryland all her life, grew up under its shadow.

After Sparrows Point filed for bankruptcy in 2012, over 2,000 people lost their jobs. This got me thinking: How would the closure impact the community? How would people’s lives change?

17 months after the Magnum Workshop, Harvey’s words were echoing in my head. 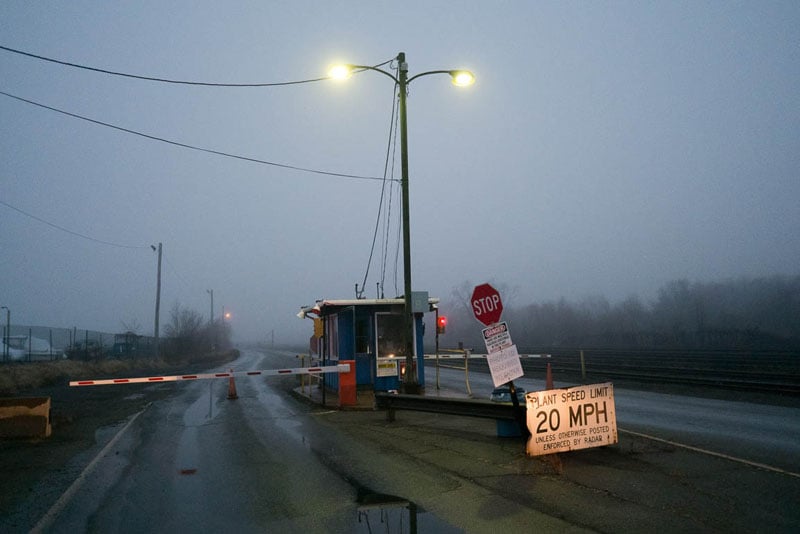 In early January 2013, I began spending time in the community that surrounds Sparrows Point. I visited flea markets, union halls, strip clubs, hair salons, Laundromats, sandwich shops, and of course, local bars. On a Wednesday evening, I stopped into Pop’s Tavern – the favorite watering hole for steel workers. I introduced myself to every bar patron, including the three generations of owners, and told them I was curious about how people’s lives were affected by the plant’s closure.

Eventually, one woman came up to me, and said, “Hey, you are the photographer doing a story on mill workers who lost their jobs. Let me run to the bathroom real quick, and then I will share something with you. Don’t move.” I didn’t. A few minutes later, she emerged from the bathroom, a cell phone clenched between her shoulder and ear. She was screaming over the bar music while drying her hands with paper towels. She approached me, dropped the towels on the bar, and handed me her phone. “Here, talk to Bobby.” A bit dumbfounded, I grasped the phone, and did just that.

After we spoke, Bobby decided to get out of his pajamas, come down to the bar and meet me in person. He was open, giving, vulnerable. Instantly, it was clear that the job loss had shaken him, and that the unknown future had rattled his foundation. After 39 years of working at the mill and just two years shy of official retirement, he shared with me that in order to keep some benefits he had enrolled – via a State and Federal program – in a local community college. 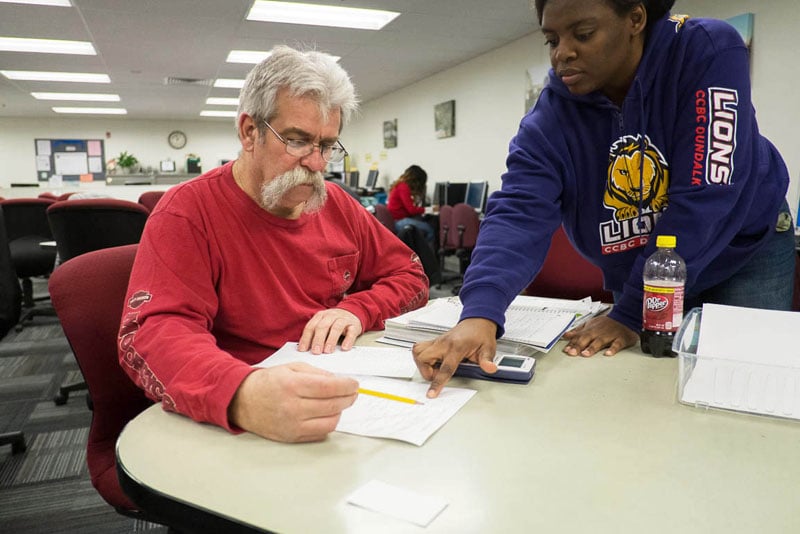 Over the next several months, I visited Bobby often. The first time I photographed him was inside the closed-down mill during a public auction. I went with Bobby to the plant to see the remaining equipment. He wanted to reminisce. I wanted to capture his last day among steel. Thus ensued a relationship where, over time, he truly accepted my camera and me. He would go about his everyday life as if I was not even there – calling school about classes, figuring out how to make ends meet at home, updating his son over the telephone. There was trust. I was honored, and I was humbled. One day, Bobby embraced that trust – he shared his real reason for enrolling in higher education. In actuality, he could have retired, accepted early pension offerings or picked up a laborer job. But when greeted with the option of enrollment, Bobby recalled how he sat as his son’s college graduation and, “cried like a little girl.” Bobby was so proud at that moment. He wanted to get a college education so his son could see him, diploma in hand, also walk across stage.

For weeks leading up to his first day of school, Bobby was calm and focused. He brushed off any worry with a smile and swipe of his mustache. But that all changed when his first Algebra class descended upon him. He misplaced his glasses, he got lost in the school parking lot, he forgot his classroom’s location and he cussed like a guy who has not been in school for almost 4 decades.

2x + 1 = 5x – 8. Bobby knew languages of carpentry, tools and dirt under his fingernails. Algebra equations were as foreign to him as Chinese calligraphy is to an American newborn. His teacher, a young fellow who Bobby felt “needed to go to war,” was thorough, yet fast. But Bobby, being on his own, with minimal support from family and friends, struggled from day one. Oftentimes, I watched Bobby do his homework, either alone or with tutors from the college’s student center. As I filmed and photographed, I noticed myself cheering him on inside. Succeed. Get the answer. Prove that you can do this. My camera would shake as I gripped its body just hoping for “x” to equal 3. But my hope could not affect his outcome, it could not assist in his learning and it could not make his son proud. Sometimes I wondered, “If I had to return to college, now 14 years after my graduation, how would I fare?” The thought utterly frightened me.

Bobby worked extremely hard to tackle a full course load. But 12 credits, via Algebra, English and Sociology classes, ultimately got the better of him. He was not used to the schedule, demands, analysis and technicalities. He began yearning for the days that had been common to him for so long – laughter over the crinkle of brown-bag lunches, hiding behind equipment for a smoke break and leaving greasy fingerprints on beer glasses after work. However, spending time as the “grandfather” amongst young girls in class, albeit pleasant on the eyes, never settled in. Bobby diligently attended classes for three long weeks, but the coursework became more intense, more involved and more strenuous. I saw him try, seek help, but Bobby simply couldn’t keep up. On the eve of deadline to drop classes and get all tuition refunded, Bobby, with his chin to his chest, phoned his son. After sharing his thoughts and feelings, he subsequently called the college administrator and resigned from school. As the phone’s handset hit the cradle, I instantly witnessed Bobby’s demeanor change – nuances needed on film.

His shoulders relaxed, his chin and chest rose, and his facial hair separated as a grin came over his lips. Upon making that decision, Bobby didn’t exactly know what his next step would be. But that night, for the first time in three weeks, he slept until morning without nightmares of higher education. Eventually, Bobby decided to enroll in a trade program – a local shop class that taught welding, remodeling and home building. At the time of this writing, he was back to using his hands – with dirt under his fingernails and dust on his work boots – just as things should be. 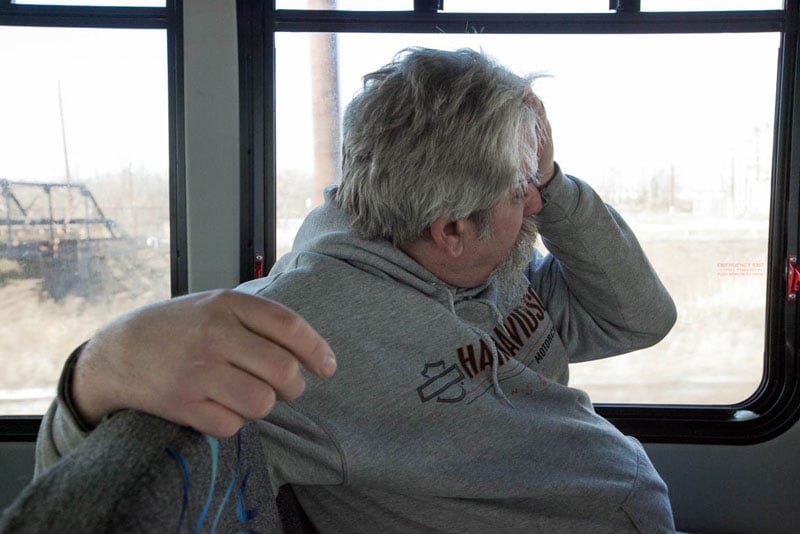 Plants are erected, and plants are shutdown. It is business and economics, and supply and demand. So it is no surprise that this experience happened to Bobby. During his ordeal, I simultaneously felt proud of him and sorry for him. He had a wonderful reason to enroll in college and attempt to graduate – I feel like nobody can argue that. What some people might argue is – there might not be a robust system in place to have workers like Bobby succeed.

Bobby is an intelligent and talented guy. He could build my home with bare hands. But while following his journey through school, he seemed totally outmatched by books, calculators, bureaucracy and tasks. This is where I felt sorry for him. Deep down, he did not want to be a failure to himself and to his son. The reality is, Bobby’s a resounding success for dedicating his life to a craft that he loved and rolling down an unchartered path.

Man Shares Murder Picture on Facebook After Shooting His Wife