For FIFA 14, the folks at EA Sports’ Capture Lab were tasked with capturing 3D head scans of the entire Liverpool soccer team, and they enlisted the help of 18 willing DSLRs and a couple of computers to make it happen.

Unfortunately, there’s not much information given in the video, but it looks like they’re using 18 Canon Rebel T3i or newer cameras (judging by the swivel screen) attached to 50mm f/1.4 lenses. The cameras are then arranged around the subject in 9 pairs, calibrated and aimed very specifically to get the shots they need. 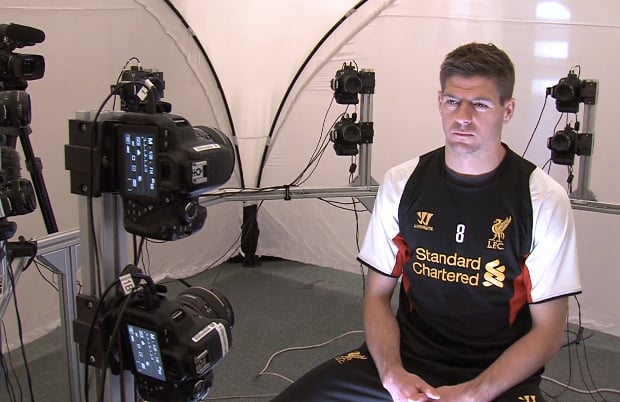 Once the talent arrives, they’re photographed from every angle as they point their head up, down and straight forward to make sure the SLRs catch every detail the designers will need to build animated 3D models for the game.

Inside the tent, they’re just capturing one flat expression, after which it’s the graphic artists’ job to take the resulting 3D model and create happiness, anger, frustration and any other emotion a Liverpool soccer player might show over the course of a game.

Click play at the top to see the magic happen from start to finish, and if you liked this, check out our coverage on a newly-developed method of capturing 3D models for video games and movies using cameras instead of lasers.

Painting a Large College Dormitory with Light for a Nighttime Photograph