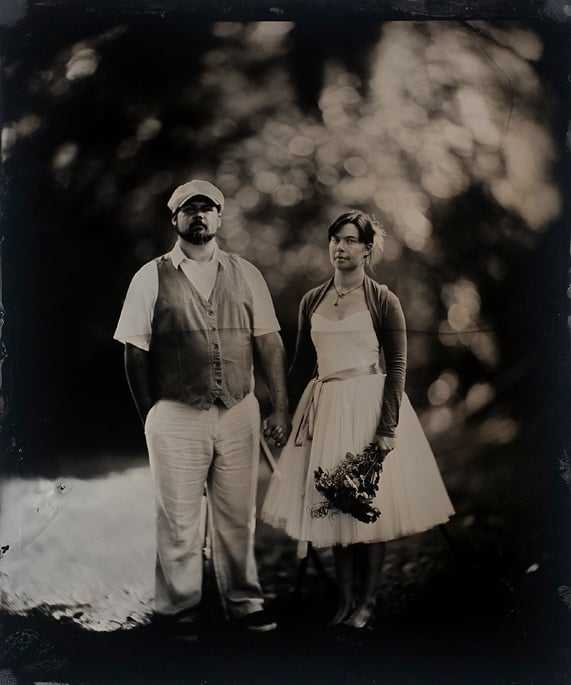 When my wife Sara and I finally decided to start planning our wedding (after a crazy Muppet Proposal proposal that seemed to tickle quite a few people’s fancy) one thing that became very important to us was what to do with our wedding portraits/photography.

We are both photographers. Sara and I have experience in handmade processes (Sara is heavily into large format pinhole photography and albumen printing), and after the proposal thing went viral we had all kinds of photographers contacting us pushing their services in our face.

Finally, we decided to forgo traditional “wedding photography” and we would find someone to take wet plate portraits of us in our wedding attire. This also meant that we could simply enjoy our wedding with friends and loved ones without worrying about anything photography related.

Perhaps best known by Matthew Brady’s famous Lincoln portrait, wet plate photography involves pouring an alcohol solution across a thin metal or glass plate, dipping it into silver nitrate and exposing it while still wet. Because the entire process, including developing, must happen before the plate dries—about 10 minutes—wet plate photography requires a portable darkroom when it’s done outdoors.

One of the first things I had noticed when I started searching for wet plate photographers (this was right before the current explosion of wet plate popularity and everyone suddenly shooting wet plate) was that there weren’t many websites. I thought maybe that these photographers were so into their process that they forgot what a website or the Internet was.

But after finding a few website forums devoted to hand made processes (e.g. The Large Format Photography Forum and the Wet Plate Collodion Photography Forum) I ended up finding someone that was 45 minutes from where I lived. It turned out to be the University of New Hampshire’s Confucius Institute Co-Director’s Yige Wang.

Yige doesn’t really hang his shingle out as a photographer. He has a day job and does wet plate as his past-time passion. He told me during our session that he loved to photograph old dilapidated barns, and no matter what method he tried; large format film, digital, etc he wasn’t getting the “look” that he could see in his mind. When he tried wet plate, that looked suddenly was there in front of him and he’s been shooting large format ever since.

At first, Yige agreed to spend the day with us and we’d end up with some 8×10 portraits and some smaller plates. But the night before the session, he emailed and said he had changed his mind and wanted to shoot everything on his 20×24″ view camera, which totally blew me away.

The session took place in Yige’s front yard. He had the camera he was going to shoot with as well as a custom “mobile” 20×24″ camera he wanted to show me. 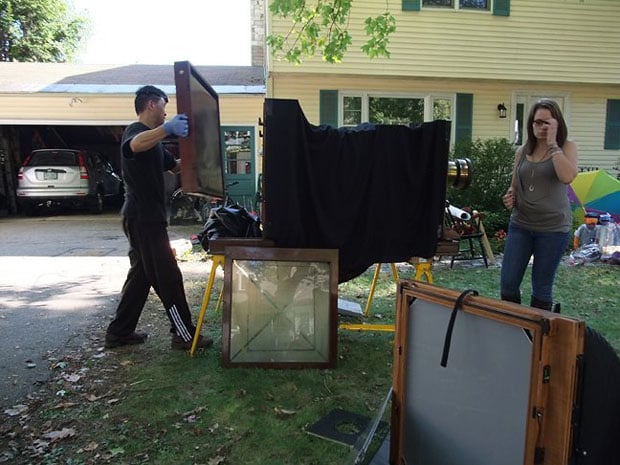 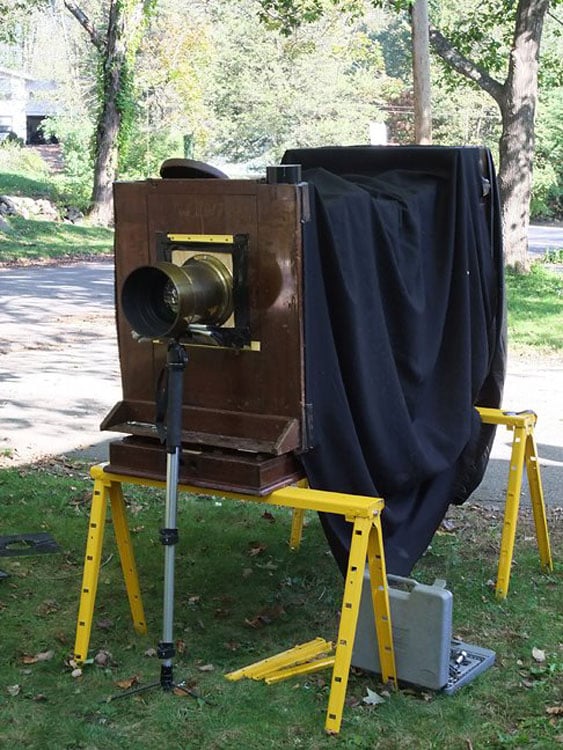 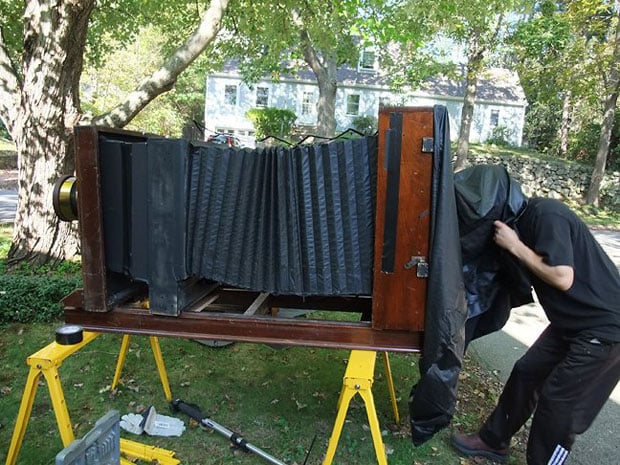 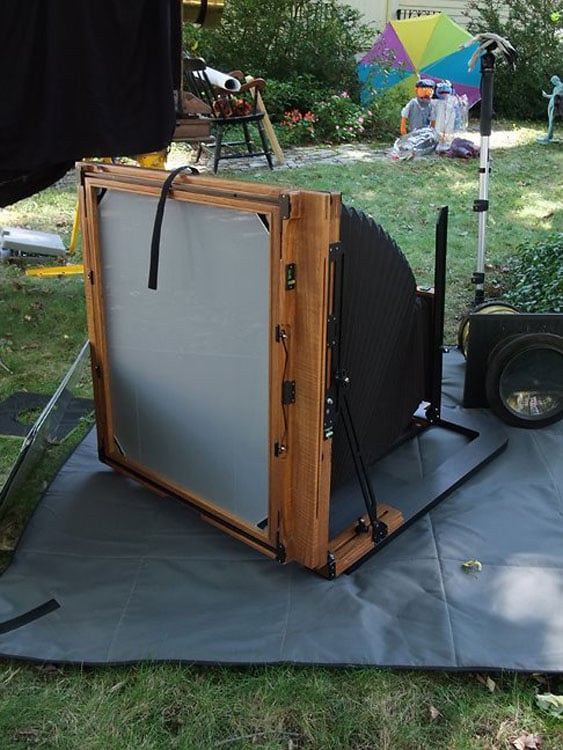 His mobile darkroom was a small U-Haul trailer that he had next to his garage. 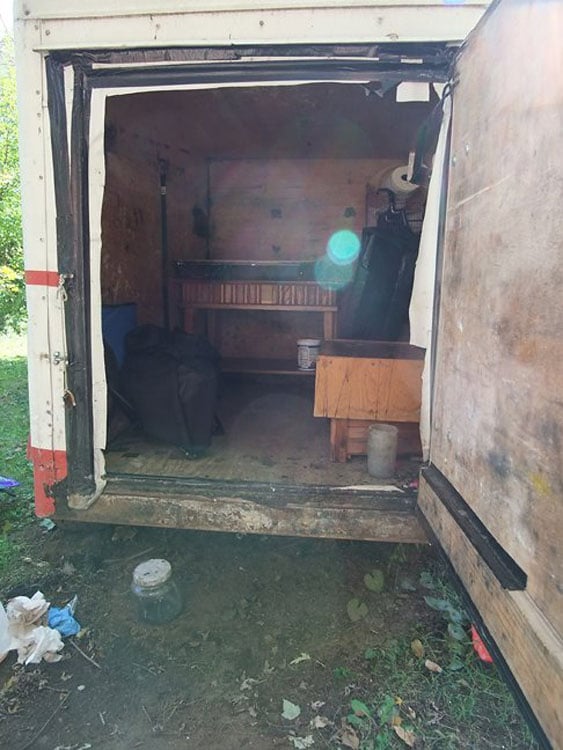 If I remember correctly, he used two lenses; one was a giant cone Petzval lens and the other was a rapid rectilinear style lens. I think the lenses were fixed around 5.6 or f/8 or thereabouts. The Petzval lens gives that gorgeous swirling out of focus look and if I remember correctly he used that for the individual portraits. I believe both the lenses and the camera were from the 1860’s. 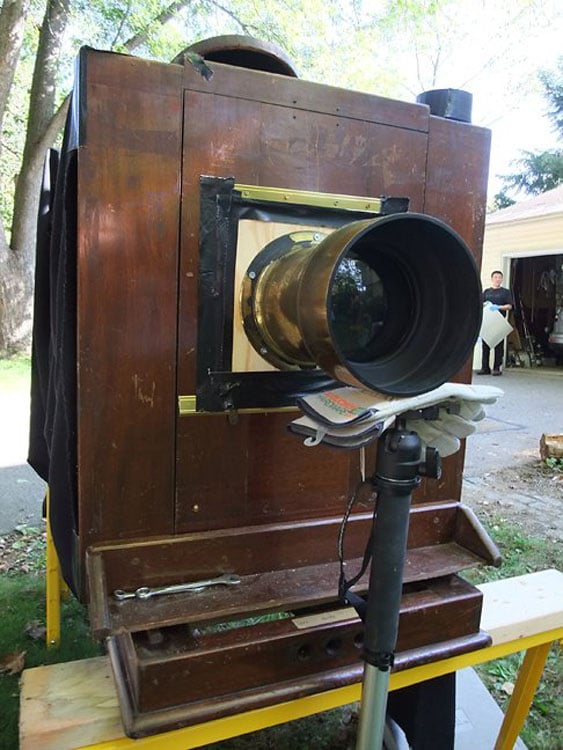 Yige would first position us in front of his camera. We had modeling rods behind us to hold us into place as best as possible so we wouldn’t move much during exposure. 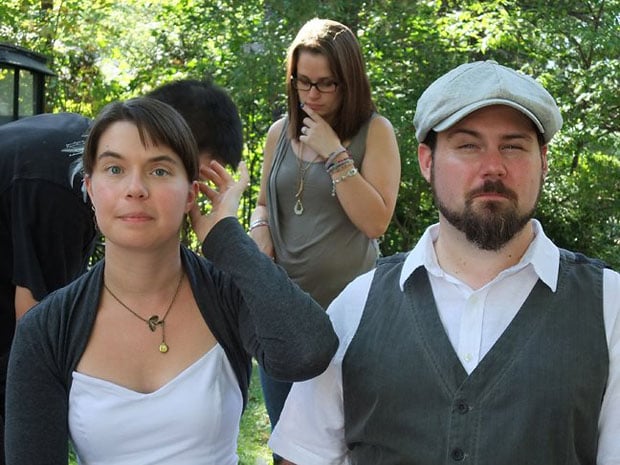 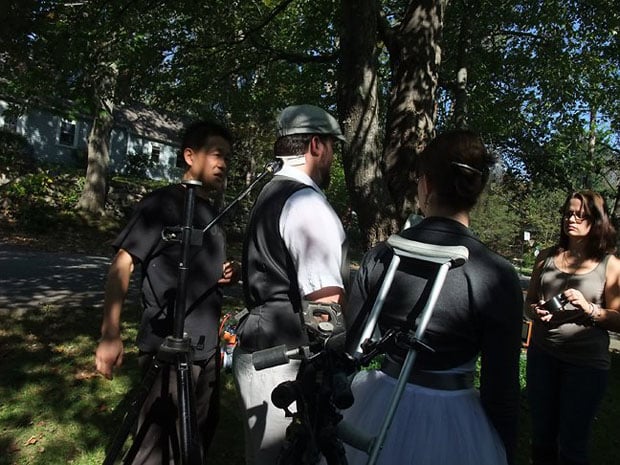 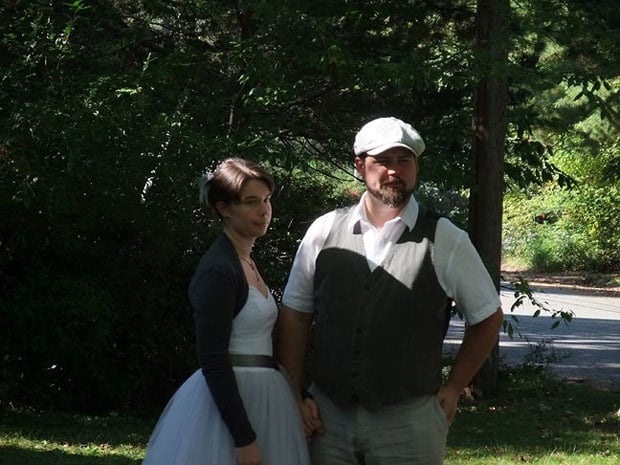 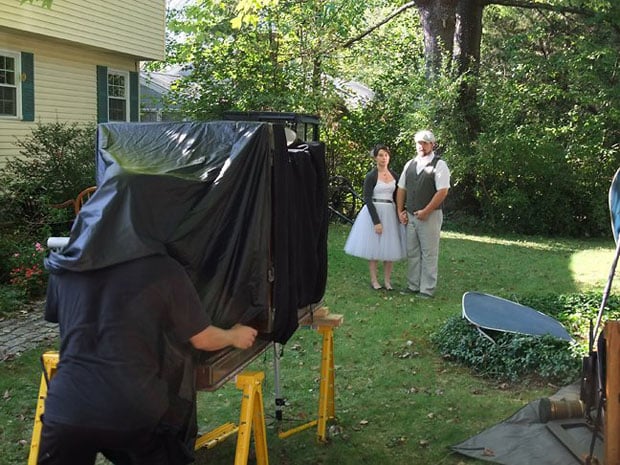 After we were placed, he would coat the plate, then bring the plate into his portable darkroom to coat with silver nitrate and placing it in the holder. Then he would come back out, make sure focus was good on the camera, put the holder on the back of the camera and expose the plate. 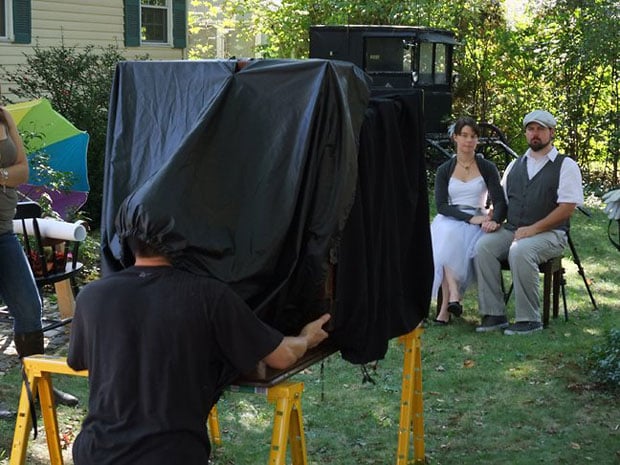 Our exposures were somewhere around 8-10 seconds after a few trial and error plates were done. Yige was very generous to make sure we got some individual shots as well as the shots of us together and he even took a shot of our two Muppet dopplegangers as well. The images were exposed on pre-cut sheets of aluminum. 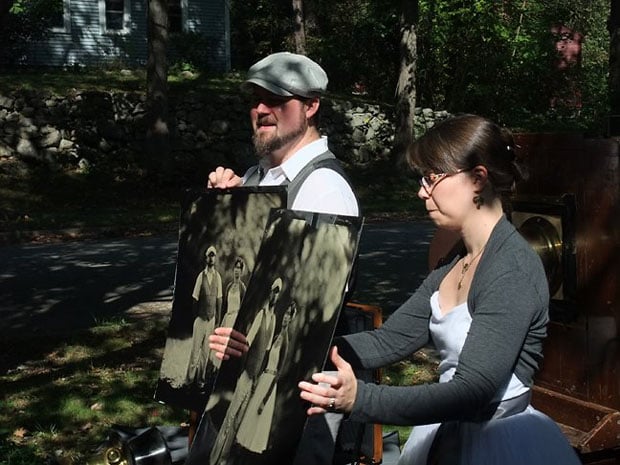 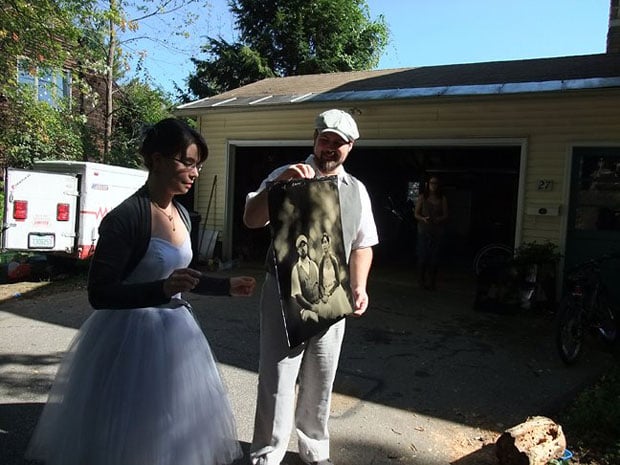 At the end of the session we had eight 20×24″ plates that were ours to keep. We picked them up a week later after he coated them. Here’s a selection: 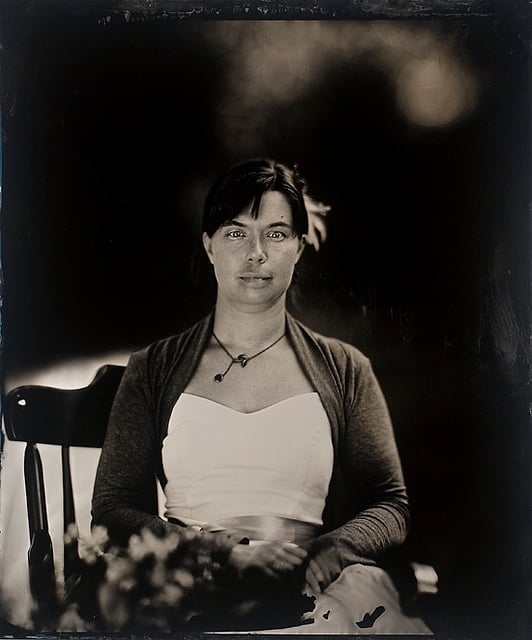 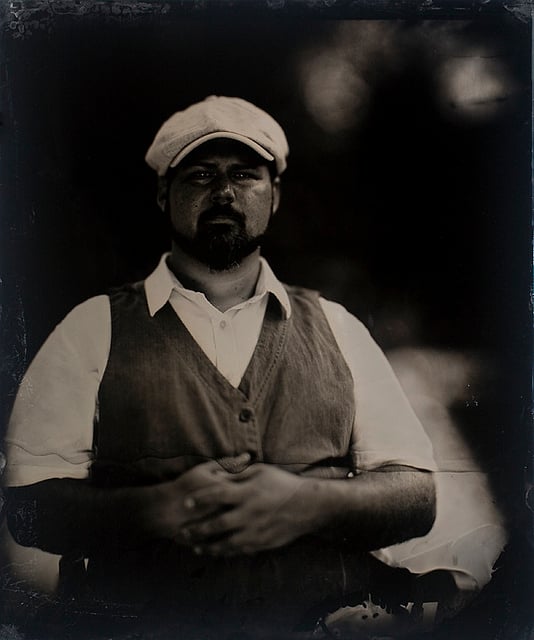 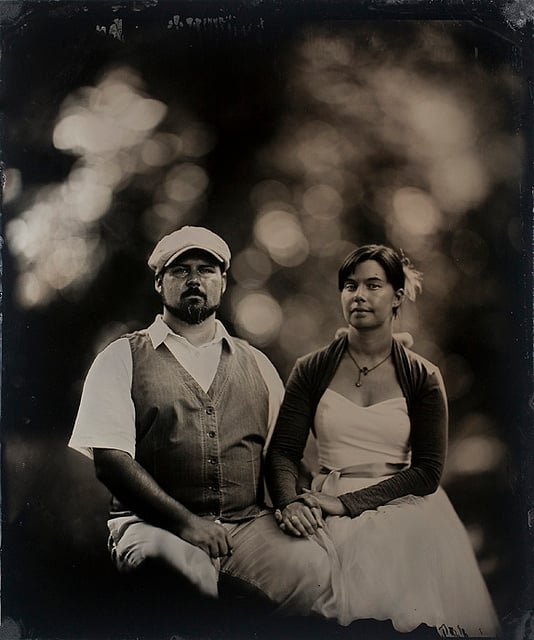 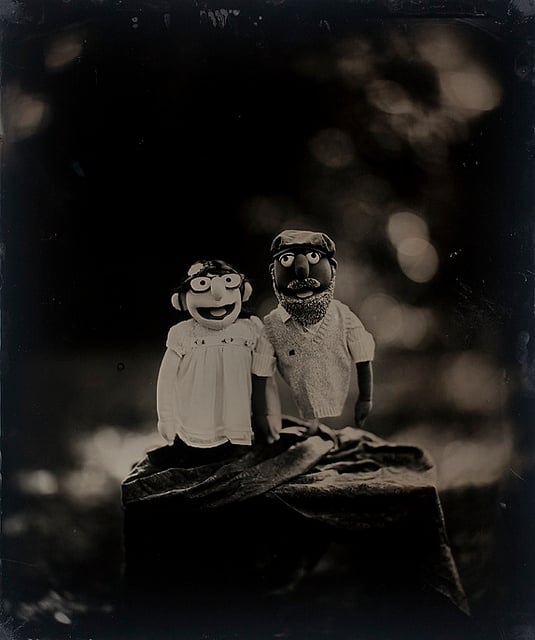 I really can’t tell you the sense of awe and amazement I feel whenever I look at these plates. As a photographer that learned on film and who has dabbled with alternative processes, I can understand the absolute love of the craft Yige has for his photographs and his process. 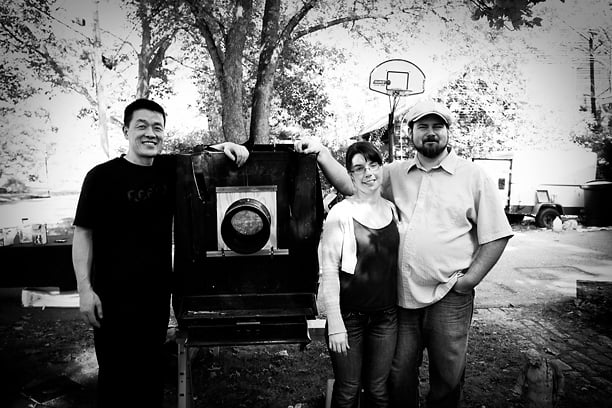 I love the mood and the feeling these images give me, and love that hundreds of years from now, our distant relatives will have these timeless reminders of who we are; that we existed. I’m also overjoyed to see wet plate and alternate photography practices becoming more and more popular and the preservation of this important way of photographing.

We have a behind-the-scenes video that our friend took for us during the sessions. We tried to capture every step we did when possible:

About the author: Sid Ceaser is a studio and location photographer based in Nashua, New Hampshire. He specializes in band and musician publicity, press kit and promo photos, as well as headshot photos for people in entertainment and business. You can connect with him through his website, blog, Facebook, and Twitter.

Panasonic to Unveil a Rangefinder-styled GX7 MFT Camera Next Month

DSLR Giveaway: Win Your Choice of a Canon 6D or a Nikon D600!