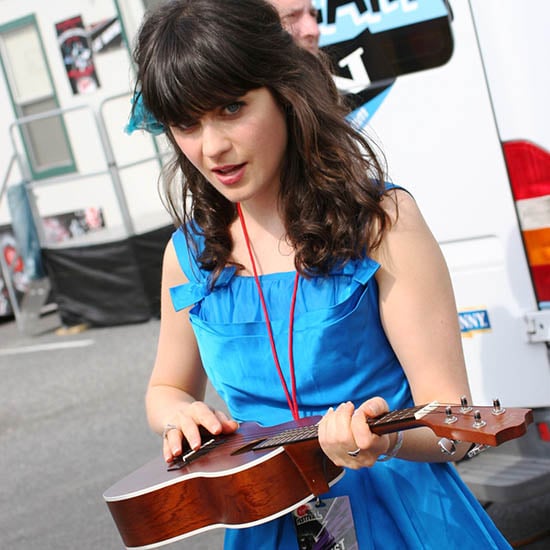 Zooey Deschanel is the latest performer to weigh in on concert etiquette, with signs posted at concerts by the actress/singer’s indie pop act She & Him asking fans to ditch their cameraphones and refrain from snapping photos.

“At the request of Matt (musical partner M. Ward) and Zooey, we ask that people not use their cell phones to take pictures and video, but instead enjoy the show they have put together in 3D,” according to signs posted at a recent Toronto stop on the current She & Him tour.

She & Him (@sheandhim) is about to take the stage at @turfTO! This is going to be epic. pic.twitter.com/vHlWKpv8Bu

While the request is politely worded and seems more about preserving the aesthetic experience than greed, fans didn’t take kindly to way it was implemented. “Security guards…are now flashing flashlights in the faces of fans in the first few rows who dare pull out their phones,” tweeted concertgoer Rob Duffy.

Other fans had more humorous things to say:

The band did allow a handful of pre-vetted photographers to shoot the show.

While the policy was credited to Deschanel, Ward is an even more outspoken critic, enforcing blanket bans on audience photography at his solo shows.

She & Him join a growing roster of indie acts complaining that wall-to-wall photo and video coverage at shows robs fans of a full musical experience. Signs posted at recent shows by the Yeah Yeah Yeahs proclaim:

“Please do not watch the show through a screen on your smart device /camera. Put that (junk) away as a courtesy to the person behind you and to Nick, Karen and Brian.”

Likewise, postpunk firebrands The Savages made this request:

“Our goal is to discover better ways of lving and experiencing music. We believe that the use of phones to film and take pictures during a gig prevents all of us from totally immersing ourselves. Let’s make this evening special. Silence your phones.”

(via Canada.com via Gawker)

Image credits: Zooey Deschanel by www.ShootJoeC.com, She & Him photo by Angel 007